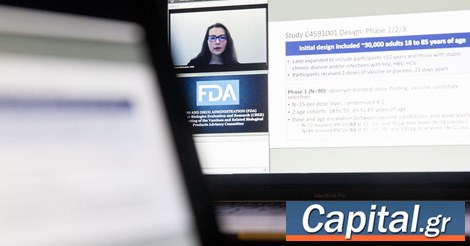 Thousands watched the Food and Drug Administration (FDA) Vaccine Expert Panel remotely review the pros and cons of granting an emergency license for the Pfizer and BioNTech vaccine against Covid-19 last Thursday. a factor – “key” that is likely to be a turning point in the fight against the pandemic.

The companies started the process by presenting their findings and then the FDA committee followed up with its analysis of vaccine efficacy and safety data. The public also had the opportunity to express their views, and then the committee of experts discussed the data again. So far so good, as it is a fairly formal and routine procedure.

The committee meeting culminated about nine hours after it began, when its members were asked to vote on whether they would recommend the FDA approve the vaccine with the following indication: “for active immunization to prevent COVID-19 caused by SARS-CoV -2 in persons 16 years of age and older “.

Everyone was holding their breath during the two minutes that the counting of votes lasted and then the result was announced: 17 members of the committee voted yes, four said no and one member abstained.

The next day, the FDA granted the emergency license, launching one of the largest mass vaccination operations in U.S. history. But what happened to these votes?

It may not be the ideal condition to see disagreements in such a vote, but it makes perfect sense. Some experts tend to think differently than others. But what was the opinion of the dissidents?

The importance of justifying the vote

This is where things went wrong. The answer is that we do not know. The usual procedure is to ask the experts who voted “no” to explain why. However, this meeting closed immediately after the vote instead of taking an additional 10 to 20 minutes to discuss.

This is unfortunate, especially given the reservations that many people in the US have about vaccines. Without a full explanation, it is impossible to know whether the votes reflect a real concern about the vaccine or, as it is more likely, simply imply that some more detailed research is needed on its use in a certain subset of the population.

If there is one period in which full disclosure and transparency is needed, it is today. And that did not happen. The FDA has the opportunity to do better this week, when the committee meets again, this time to review data surrounding Moderna vaccine against Covid-19 on Thursday. Hopefully we will have the opportunity to hear the views of the committee members, including any reasons that will lead to votes against early, emergency approval.

The “no” was not about the safety of the vaccine

As for last week’s work, I believe – having watched and heard the whole meeting – that the vast majority of experts agree that the vaccine is safe and effective for most people, including the most vulnerable elderly and those with underlying diseases. pose a higher risk of developing severe Covid-19.

The main point of contention seems to have been the fact that only 153 volunteers in clinical trials were between 16 and 18 years old. It is very likely that the dissenters were reluctant to propose a vaccine for this newer group without further research. All we needed to do was listen to it to be sure, or at least listen to what other reasons might have been invoked.

Instead, the commission inadvertently gave some “ammunition” to those who underestimated the importance of using vaccines from a position of authority.

The reality is that 16-year-olds are not biologically very different from 18-year-olds, at least immunologically.

Also, those who disagreed with this younger age group had virtually no reason to believe that 18 years old would be a better age “cutter” for the vaccine, as the data did not reveal how many 18-, 19-, or 20-year-olds participated. in the clinical trial – only that there were 14,690 people aged 18 to 65 years, with a median age of 46 years, who received the vaccine. But we should have heard their arguments.

Finally, it does not matter if emergency approval is granted to those who are 16 or 18 years old, as people in this age group will already be at the end of the “queue” of those to be vaccinated, based on the order priority.

By the time it’s time to vaccinate them, we will probably have data from both Pfizer-BioNTech and Moderna clinical trials, which will focus on adolescents.

As for the big picture, these four votes did not delay the approval of the vaccine and will probably not prevent many Americans from staying cool in line, waiting for a vaccine on their arm. But it would have been much better if we had let this last debate take place.