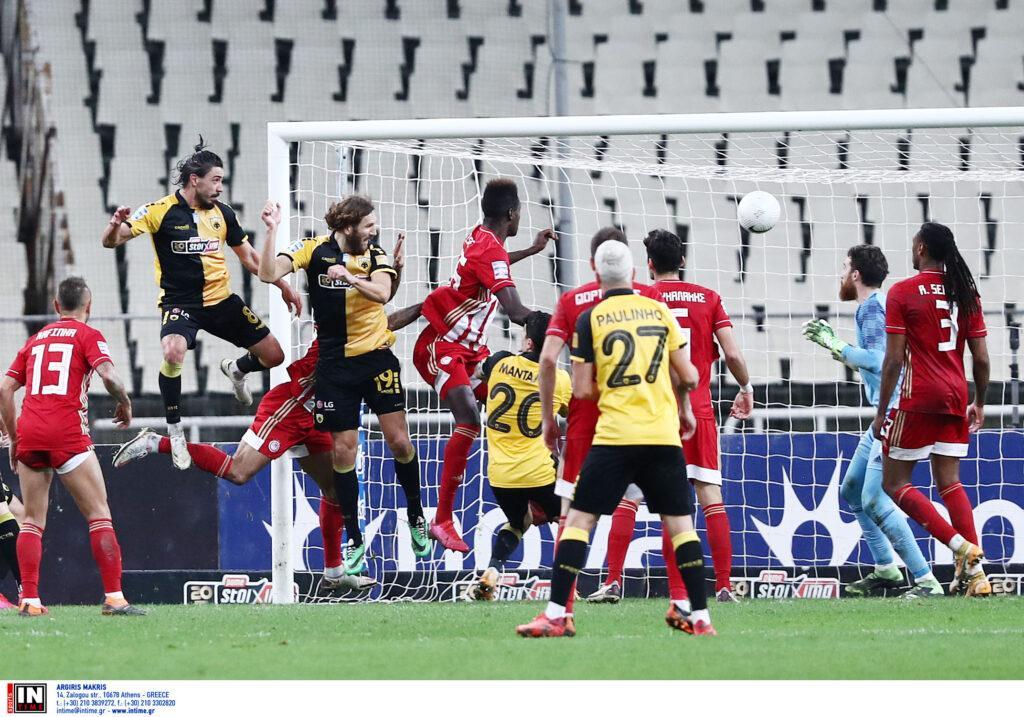 This was normal AEK.

A team with intensity, will and passion in its game. The Union was excellent in the big derby with Olympiakos, crushed the team of Piraeus in its frames and deserved the victory, but in the end it remained at 1-1 in the field of OAKA.

Jamba and unfair based on the image of the two teams, because AEK could not just win, but “press” Olympiakos. At least, in a crooked match he managed not to lose everything, thanks to the magic of Livai and the leader Simoes.

The Union even lost the great opportunity of Tankovic in the end in the… field of OAKA, with the result that the overthrow did not take place.

Thus, the difference with the top remained at -6 with AEK having given all its home derby, and has not defeated either PAOK, PAO or Olympiakos.

The beginning of the match found AEK appearing with what Massimo Carrera tried in the last training session. From the moment Czigrinski was available – even with an injection – he took a position with Nedelcearou in defense, while Bakakis and Lopez were the options at the ends of the defense. Simoes and Kristisic are both in the midfield and a trio behind Karim, composed by Livai, Mandalos and Livagia.

In her own way

AEK seemed from the beginning that it wanted to impose its own rhythm. To control the midfield, to move the ball and for her to have the match on her own feet. He wanted to take advantage of Garcia’s speed at the ends, the inspirations of Livagia and Mandalo, but at the same time to maintain consistency in the defense and not to be surprised again. As it happened, with the Union putting a lot of intensity in its game and the “yellow-blacks” winning in most personal duels.

The Union managed to close every corridor to Tsintota’s home, but it seemed that something was missing in the final selection. Although he created the conditions by winning balls in the midfield, he lacked the right choice to become an opportunity. AEK threatened mainly from static phases – with the magical executions of Garcia – and when they pressed the defense of Olympiacos, they easily made the mistake.

On the plus side of AEK – especially after what we had seen in the previous period – the excellent defensive function. Correct overlaps, many runs and most importantly, the leading presence of Czigrinski, who cleaned with comfort and a clear mind every difficult moment. AEK was threatened only by static phases, with Tsintotas reacting exceptionally in the only moment that was required. But the match had no emotions and led to a white half (0-0).

Carrera immediately threw Oliveira into the match at the beginning of the second half, but Martins responded with a double move, the entry of Fortouni and Kamara. The entrance of the two made Olympiakos more aggressive, as it gained meters inside the stadium. AEK started to have gaps in the defense and this brought damage. Brusai found himself unguarded in the area – Lopez covered him – and with a place he defeated Tsintotas and opened the score (55 ‘).

This goal crushed AEK psychologically. He stopped having the liveliness and intensity that he produced in the first 45 minutes. He tried to find some solutions from static phases, but the quick draw did not come. At the same time, Olympiakos now had a lot of empty spaces to counter-attack and was particularly dangerous when gaining balls in the midfield. Time passed with AEK not being able to exert pressure.

The class of Simoes

Carrera tried to intervene in the match with the triple change of Sakhof, Tankovic and Paulinho in the 70 ‘, but the image remained problematic. The leading personalities, the players who understand the weight of the jersey, had to speak there. Like Andre Simoes, who put the entire defense of Olympiacos in the net in the corner of Livai and brought the match to balance in the 80 ‘, at a time when there seemed to be no solution.

This goal gave air to AEK and the psychology it needed to claim victory in the last period of the match. The Union pressed, had the will and stubbornness to make the overthrow, but in great moments like that of Tankovic in the 90 ‘, the right effort to get the victory was lacking. And in the end, in fact, it took the Tsintota reflexes not to lose everything through one phase.

See how enwsi.gr conveyed and commented live on the match by clicking here