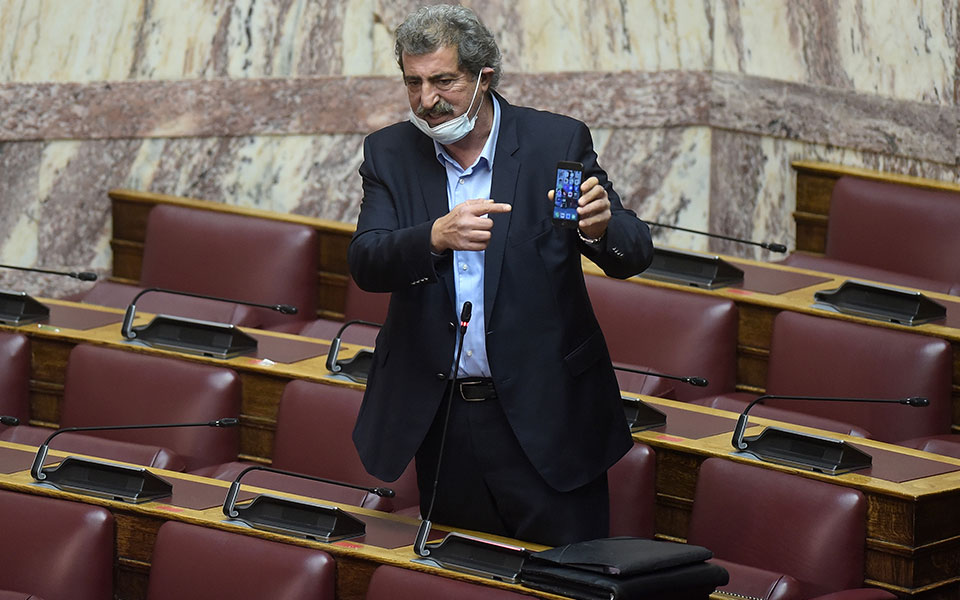 The discussion for the waiver of his parliamentary immunity took place after a lawsuit for defamation filed against him by the publisher Giannis Kourtakis.

Earlier, SYRIZA MPs raised an incidental issue, saying that the case should not be put up for discussion and voting, otherwise the Constitution and the Rules of Procedure of the Parliament will have been violated. SYRIZA MP George Katrougalos said that the development shows the personal revenge of media leaders, which ND adopts as its own and said that it should not be introduced for discussion and crisis, because the Parliament is asked to reconsider the request for lifting immunity which has already been rejected by Parliament and while the facts are the same.

“An attempt is being made to use criminal law to the detriment of freedom of speech. It also has the peculiarity that the Parliament has already been placed. An attempt is made by legal tricks to show that the basis of the new lawsuit is different from the old one, but those who read it – and this should have been done by the ethics committee – see that the facts are completely similar. Here there is an effort that results in the very imitation of the institutions. We cannot vote continuously until what the media leaders want is passed. That is not the meaning of democracy. “The deputies represent the nation, not the interests of the media”, said George Katrougalos.

Dimitris Tzanakopoulos said that it is being abusively introduced since these are the same incidents, the same opinions, which concern the same person, Mr. Kourtakis, and the Parliament decided not to lift the immunity of Mr. Polakis. “Today, it is abusively reintroduced with obvious political expediency, because the deputies of ND may have neglected to come to the Parliament or disagreed with the line of ND. Therefore, the Parliament should continue to vote until the point that Mr. Mitsotakis will be satisfied, that is, to lift the immunity of Mr. Polakis in the case with Mr. Kourtakis. “You have turned Parliament into a watchdog of publishing and business interests,” said Dimitris Tzanakopoulos.

“It simply came to our notice then. We do not have the established trade unionists and their entanglement with the ND, here we have the power of the press not as a fourth power, but as the first, which dissolves democracy, which controls the political system, which controls politics and catastrophizes it, which degrades it “, Said the SYRIZA MP Thodoris Dritsas. “This is the modern role of the big publishing houses that are really a parastate. And we will ignore that. Because we are comfortable with the News, the Parapolitics on the one hand, and everything on the other. It is a major issue. It is a backdoor for the undermining of the Greek democracy itself. We will return to the season of 1-1-4. We will not allow you arbitrariness and hidden authoritarianism in the name of local legitimacy “, said Mr. Dritsas.

“I am very happy today because you are giving me the opportunity, for the second time in a short time, to say the works and days of a certain straw man, who with what is happening today, personally humiliates you, you as a parliamentary majority,” he said. SYRIZA MP Pavlos Polakis added: “I am talking about Mr. Kourtakis, whom I call a straw man and let him file another lawsuit against me. 3 months ago came his lawsuit which even then said that I was slandering him. With the same and some slightly different elements, today my revocation of immunity is requested again. The same things I have said from the floor of parliament, in plenary sessions or committees, in relation to the works and days of this particular gentleman and many others in relation to KEELPNO, NOVARTIS, because it failed last year to lift the my immunity. You had then underestimated it by half the explanation. The other half of the explanation is that 15 to 20 of your deputies did not want to vote for the lifting of my immunity and to hang a lantern on Kourtakis “.

Mr. Polakis addressed the seats of ND saying: “And now taking posts from social networks, which say the same things as what I had said from the floor of Parliament, puts you back as if you were the puppets of a puppet theater, its figures karagiozi of a shadow theater, will make you vote again. To satisfy him and the one behind him “.

The MP referred to statements by ND MPs, placing them in the “far right faction of ND”, who “only did not apologize on their knees”, because they failed to lift his immunity, last time. Mr. Polakis denounced the privileged treatment of Mr. Kourtakis’s sites during the Samaras era, through entries for KEELPNO, and added that every issue, with the far right wing of ND “.

“All this deep entanglement and interdependence between Mitsotakis, the far-right wing of ND, Kourtakis and other media leaders, has intensified in recent months, on the occasion of the pandemic, which the government found as a pretext, to facilitate and “It clogs, at regular intervals and with completely opaque procedures, with public money, the vast majority of the media, except for some annoying ones”, said Pavlos Polakis.

The MP estimated that very soon SYRIZA will be called to take over the responsibility of the country again, and used a mantinada, closing his speech: “If the eagle is wounded, do not feel sorry for him. It will open its wings again and then you will be afraid “.

However, the way in which the parliamentary representative of ND, Giannis Bougas, commented on it, led to strong reactions from the SYRIZA MPs.

“Mr. Polakis, keep it up. Do not stop. Continue to oppose the SW, the way you did it today and you do it constantly. And because Mr. Polakis takes care to launch a threat every time, all this refers to the well-known “we will come back and the earth will tremble”, said Giannis Bougas.

“It is a shame to say these things”, the SYRIZA MPs shouted from their seats.

“It is a shame for you to think about it and imply it,” the ND parliamentary spokesman insisted, adding that it was unacceptable to hear threats from one party that “next time it will be different”, or that “the eagle will take revenge”.

“Get it back!”, Shouted the SYRIZA MPs.

“I spoke of an inappropriate expression by a colleague. I did not say anything. I said that associatively, it can refer there… I just said that. “When you are constantly cursing, when you are threatening, we cannot remain apathetic!”, Said Giannis Bougas and added: “I do not provoke in the parliamentary dialogue. I do not mean or leave any hints about SYRIZA. I said that when one uses such expressions in the parliamentary dialogue, these associations can also be made. So the one who uses them should be careful and not the one who says that associations can be made. That is what I meant, I think it was realized. “Unless you want to misinterpret what I say.”

Mr. Polakis asked to speak on staff. “Mr. Bougas tried, in a vulgar way, to distort the mantinada that I said and to include it in a logic that I am a bearer of Nazi logic. He will completely withdraw what he said from the minutes, otherwise he will force me to openly listen to the one who has a vice-president in your party and who sings at a party of the party that used to belong “we will return and the earth will tremble”! For Adonis Georgiadis. Tell him that! My family has paid the Nazis. They killed my grandfather. You will not talk to me who have given refuge to whatever remnant of Germanotsolia exists in Greek society, in your party. “Take back what you said now!”, Said Pavlos Polakis.

“I did not mean a Nazi mentality, neither for Mr. Polakis nor of course for a parliamentary party. I would not do it under any circumstances. “What I said is that with these expressions, and in fact I said it in good faith to protect my colleagues, with such reports it turns out that you are a threat”, said Mr. Bougas and stressed that Mr. Polakis referred to the ND MPs and when ” “No one uses such expressions in their speech, it is dangerous and for our democratic state, such associations are caused”.

“I would never dare to say that a parliamentary party, other than the Golden Dawn formation, is governed by a Nazi mentality,” Bougas said, adding that such threats are dangerous to democracy because they refer to such associations.

“Do you know, Mr. Bouga, that in democracies there are such changes”, commented the SYRIZA MP Costas Zachariadis and added: “here you were a government in the period 2008-2009, which bankrupted the country, based on what you say, you should not never return but you returned in 2019 to bankrupt the country again. Mr. Mitsotakis spoke from this step, considering that he will rule for the next 15 years, he said it, we have it on video, and very soon Mr. Mitsotakis and others will understand that, for himself, time begins and thickens dangerously. So away from us these. Democracy has institutions. After all, you saw democracy and institutions as property, and even your family, dealing with it. You will quickly understand that the country needs to turn a progressive page, with respect to the institutions and the citizens “, said Costas Zachariadis, SYRIZA MP.

Regarding the complaint, the parliamentary representative of ND said that both the Ethics Committee and the Plenary Session, in order to decide on the waiver of a Member of Parliament, do not check the validity of the accusations except the conditions set by the Constitution. “Do not panic, Mr. Polakis, about whether the ND MPs who did not participate in the vote last time, doubted whether your immunity should be lifted. The facts, then and now, objectively constitute the offense of defamation. The courts will judge whether they are valid or not “, said the parliamentary representative of ND and added that the cases are not the same, last time and today, when the waiver of Mr. Polakis’ immunity is judged.