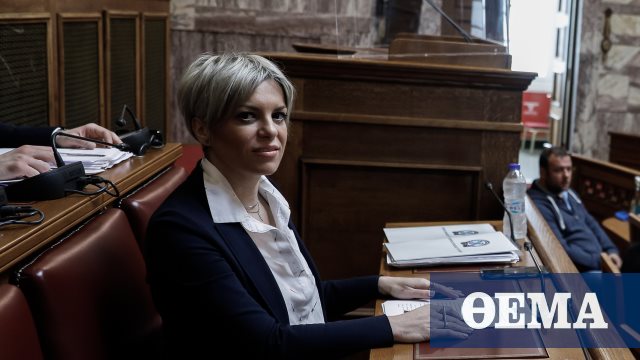 The acquittal of the two defendants – one of whom is the son of an official member of the main opposition party – Attack with T-shirts outside the house of the general secretary of anti-crime policy Sofia Nikolaou, proceeded with its decision the Single Member Autophorous Criminal Court.

The acquittal of the accused concerns the charges of disobedience and resistance. On the contrary, for this third offense of insult, the trial was postponed in order for Mrs. Nikolaou to appear in court and to clarify whether she felt terror and threat from the actions of the accused. This is because, as mentioned, her statement to the police contradicts her public statements.

Now, during today’s trial, the son of the official opposition party official stated in his apology that by throwing T-shirts outside Mrs. Nikolaou’s house he wanted to become “The voice of the prisoners”. In fact, as he claimed, this move was aimed at complaining that the decongestion of the prisons is not progressing, characterizing the demands of the detainees in the middle pandemic.

The accused then claimed that as an anarchist he disagreed with the insult and expulsion of persons and pointed out the following: “The purpose was not to insult and offend … I do not understand that this had any insult or terrorism. It is a political critique. The specific lady the reason we mentioned her is that 15 days ago a 35-year-old man committed suicide in Domokos who was in debt because he could not stand the conditions in prison. In the prisons of Larissa there were 4 dead from covid while if EODY had gone they would have been saved “.

Chairman: How do you connect these deaths with Mrs. Nikolaou?

Accused: The government is totally murderous. Outside you have the opportunity to go to the hospital. I was a prisoner and I know. The prisoner cannot go.

In fact, answering a question from the president, he said: “Personally, Mrs. Nikolaou has nothing to fear. He has to be afraid of the people, the prisoners “. Referring to the moment of his arrest, he told the court: “When the police came in and told us to stop, we stopped. We could have left but we did not leave. “

For his part, the second defendant, who is Italian, said in his apology to the court: “I am not in the mood to apologize for something I would do many times over. I know the role of Mrs. Nikolaou. The least I could do about the deaths in prisons due to the pandemic and the conditions of detention was this protest … This man whose actions indirectly lead to the death of other people, is a murderer. I have no intention of insulting… “.

The viral load in the sewage of Thessaloniki was reduced

Spiegel: “Winners of the year” are the founders of the German BioNTech

Scenarios for total lockdown in prefectures with heavy epidemiological burden