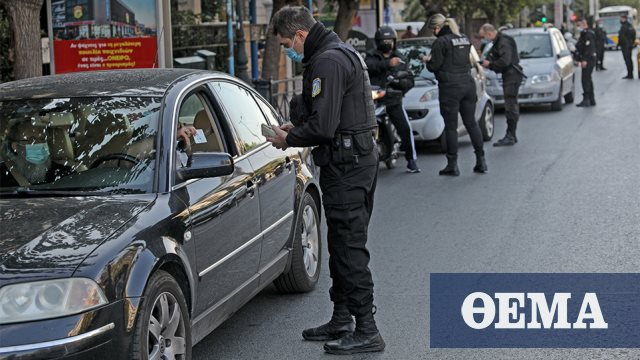 Total prohibition in prefectures of the country, where an outbreak of its pandemic is observed coronavirus or the number of remains high cases despite the measures in force, may be announced by the relevant ministers.

The relevant decisions are a matter of hours or some 24 hours, while during the afternoon briefing on the evolution of the pandemic, it is not excluded to describe the further tightening of the current lockdown. Areas where epidemiological indicators warn of the risk of further spread in the community and additional pressure on the health system are as shown in Northern Greece (such as Thessaloniki and Kozani, where M. Chrysochoidis and Nikos Hardalias will go tomorrow respectively), in Thrace and Western Attica. All the issues that need special attention or even tightening of the plan in view of the Christmas holidays were put on the “table” of the meeting-teleconference of the Maximos Palace under the Prime Minister and the experts of the Committee of the Ministry of Health.

“There is no case of relaxation, there is no case of hardening. Relaxation is a wrong signal. When we want to be more relaxed in our behavior during the holiday season, it would be a wrong signal of what we have to face. “, meanwhile, the government spokesman stressed, Stelios Petsas speaking to parapolitika.fm, where he stressed the danger of a third wave of the pandemic after the holidays and added: “We have noticed all this time during the implementation of lockdown measures in various parts of the country that in some regional units, either the cases do not fall as much as we would like, or they fall slowly or we have small flares. Unfortunately we see this in the last few days in certain areas, in such cases if the cases persist high, the pressure on the health system high then we will have no choice but to take even tougher measures for a certain period of time during the weeks. coming by January 7th. At a local level more severe (lockdown) “.

Chrysochoidis: No one can shake his head

Earlier strict message for compliance with the measures Mr. Chrysochoidis addressed after an extraordinary meeting on West Attica. “No one can shake his head”, he said.

During the meeting, the issue of implementing measures to reduce it was discussed pandemic and the problems faced by the regions of Western Attica.

Immediately after, the Minister of Civil Protection, Michalis Chrysochoidis stated: “I do not have much to say, in fact I have only one thing to say: No one can shake his head. We are here to help, to explain, to assist, but no one’s head. Otherwise the areas will be sealed, even house to house… It is neither a threat nor a warning. It’s a decision and it will be made if necessary “.

The Deputy Minister of Civil Protection and Crisis Management will go to Thessaloniki tomorrow, Thursday, Nikos Hardalias, which will have a series of meetings to assess the epidemiological data as they develop in the wider area, the progress of the checks carried out by the competent authorities for compliance with the measures, as well as the operational plan for protection against Covid-19 infection that they have developed the local authorities in view of the holidays.

In addition, following the completion of the recruitment process by the General Secretariat for Civil Protection of 192 executives for the needs of tracking and dealing with health threats, of which 30 executives are located in the Region of Central Macedonia, Nikos Hardalias will have the opportunity to closely monitor the preparations made for their reception by the competent Services.

Specifically, the Deputy Minister of Civil Protection and Crisis Management will have the following meetings:

At 16:30 will attend a meeting at the headquarters of the Region with the Regional Governor of Central Macedonia, Apostle Tzitzikosta, the Vice-Regional Heads of Thessaloniki, the Governors of the 3rd and 4th Health District of Macedonia, Panagiotis Bogiatzidis and Dimitrios Tsalikakis respectively, as well as the Rector of the Aristotle University of Thessaloniki, Professor Nikos Papaioannou.

At 18:00 will have a meeting at the City Hall of Thessaloniki with the Mayor of the city, Konstantinos Zervas, with the participation of the Deputy General Police Director of Thessaloniki, Lieutenant General Georgios Douvalis, the Coordinator of Operations of Central and Eastern Macedonia and Thrace of the Fire Brigade, .