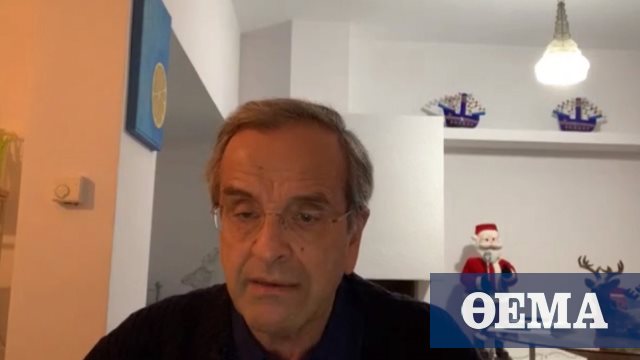 “It simply came to our notice then. Now it remains to punish the guilty. All the culprits. To never repeat such a conspiracy. To the end”. With this phrase he chose Antonis Samaras to close his intervention during the presentation during the online presentation of his book Andrea Loverdou “Attempted murder” against the background of Novartis case.

Earlier, Mr. Samaras had launched a fierce attack without naming persons in the previous government and without avoiding harsh characterizations for those responsible. “The gang started as a micron gang – as a group of conspirators against the regime. And very soon an omega gang ended up. Baby partnership, that is, incurably stupid. “The more they went to get their victims involved, the more they got involved – and they themselves revealed their illegal plans.” supported the former Prime Minister and leader of ND, Mr. Samaras, who wanted to underline the solid alliance he had with two politicians, Mr. Venizelos and Mr. Loverdo, who come from PASOK:

“We do not come from the same area, but in politics the true and solid alliances are made between people who make cuts! Difficult reforms, with great resistance. The common struggle builds alliances …. And this also concerns Andreas Loverdos, of course, but also Vangelis Venizelos. We came close, because we fought together, for the same purpose, against common opponents and we were targeted by the same conspiracies “.

Mr. Samaras agreed, among other things, with the correlation made by Mr. Loverdos in his book between the Novartis conspiracy and the corresponding conspiracy against Papastavrou, Myoni, Metaxa. “That preceded August-September 2015. And it was the ‘rehearsal general’ to set up the much bigger one for Novartis two years later.” claimed the former prime minister describing aspects of the book of the former minister, one of the victims, as he repeated the conspiracy.

THE Evangelos Venizelos taking the floor he jokingly stated that “I fully endorse everything that Antonis Samaras said as it could be the position of the Samarovenizelos, but I have some time to speak…”. Former Deputy Prime Minister Samaras, starting his position, stood in the title of the book to say that this is not an assassination attempt of a character but a murder, period! Because, as he added, the attempted extermination was ultimately physical.

Speaking specifically about the Novartis case, Mr. Venizelos spoke about the largest and most impromptu conspiracy at the same time, which he put against the heart of the Republic, with Justice as the first victim.

“It is a typical case of high treason with both the old and the current Penal Code. The Novartis conspiracy is this, some have usurped their status as exercisers of power, as members of the government, in collaboration with some who have usurped their status as prosecutors, altering key institutions of our regime in an attempt to alter the correlations of power, change the perspective of the country. “Of course, Mr. Papagelopoulos is accused of being a moral perpetrator, this is now the subject of the investigation, including the accomplices, and therefore of all the cases.”, underlined and noted Mr. Venizelos that so far, although the lawsuits have been activated against Papagelopoulou, have not been activated against the “hooded witnesses”. “Fortunately, the interrogation has begun”, added Mr. Venizelos, clarifying that he has no trace of obsession, trial and retaliation. “Politically, the attack benefited us and our history won,” said Mr. Venizelos, closing symbolically with the emblematic phrase “never again”

The constitutional expert and KINAL executive also spoke at the same online event for the presentation of Andreas Loverdos’ book “Attempted Murder”, INDIKTOS publications. Costas Botopoulos Mr.and the author George Skarbadonis. Mr. Botopoulos saw behind the targeting of 10 people the goal of the SYRIZA-ANEL government of the electoral victory at the polls, while he characterized Mr. Loverdos’ book as a cry not to repeat everything that hurt the victims themselves and democracy. The author George Skarbadonis, reading the book and watching as he explained the case as a journalist, saw “some people come out with slingshots to kill lions”, without the slightest element, only with the logic of extermination.

For the author of the book himself and a parliamentary representative of the Movement for Change, it was a big trick: They wanted to achieve a lot with one action, to exterminate politically, to lead parties to the brink of disintegration and

The position of Antonis Samaras is as follows:

“The book of his friend, Andrea Loverdou, is the anatomy of the downstream of an entire era! It is a political thriller, a dramatic psychograph, a treatise on Law on the impasses of Democracy and how they are removed. It is a personal testimony of agony. All this together …

Intensely narrative to reach the average reader on a personal level …

But the narrative turns into an analysis of the political impasse in which the country found itself. Which led to an unprecedented conspiracy … A conspiracy that the author himself was one of its main victims. And the narrative, step by step, turns into a psychograph of himself. Where, in addition to the events that unfold and the institutional framework that is analyzed, personal feelings also emerge:

The surprise at first. The refusal to believe the size of the conspiracy.

The rage, then. And trying to tame his anger.

Finally, the determination to fight to overthrow what was set against him. The frustrations he experienced from those who betrayed him. The hopes he felt from those who stood by him. Satisfaction for the collapse of the conspiracy. And the bitter taste that still remains, since the full justification is approaching, but has not yet come …

The facts presented are more or less known to many. And by presenting them in such detail in a book, it helps to become the property of many more. And let not oblivion cover them.

The context – political and institutional – in which the events are set is extremely penetrating. For everyone to understand, not only what happened, but also why.

The psychograph, however, is something that can be fully understood only by those who were themselves victims of this conspiracy. We all felt the same! Maybe at different times we managed them a little differently, but they left us with the same wounds. And the same determination was forged in our consciousness. Let us not allow such a thing, never again! Not for us – for the country!

Because, for us especially, the old one applies: What does not kill you, makes you stronger …

* From the facts presented by Andreas, I will isolate only one: the correlation he makes very correctly, between the Novartis conspiracy and the corresponding conspiracy against Papastavrou, Myoni, Metaxa. That preceded August-September 2015. And it was the “rehearsal general” to set up the much bigger, for Novartis, two years later …

The methodology followed in both cases is creepily similar! The people who undertook to carry it out, exactly the same!

The aspirations are corresponding. And it is important that a politician who does not come from my Party testifies to this – and constantly emphasizes it …

When they started accusing Stavros Papastavrou, before the elections of January 2015 and immediately after, with false accusations since then – but without having set up this whole parastatal mechanism, this whole para-judicial circuit – I hurried to support him completely personal. Without half words …

– I wish I had ten Papastavrou, I said then in Parliament!

Many were surprised by my statement. None of us knew then what would follow. No one still believed what would be set up next. Nobody knew that we would all be in the crosshairs …

But when someone falls victim to slander, you defend him! Because later you can also fall victim to a conspiracy!

* From the emotions – to be precise, from the endless alternation of emotions – that unfold, it is difficult to choose. I will only dwell on the surprise that Andreas admits. At first he refused to believe what was being set up against him. Against us. The same goes for all of us …

Although there were many “signs” – for him and for all of us – it was impossible to imagine what they were planning and executing.

–Impossible, because such a thing has never happened before.

–Impossible, because it was completely absurd: They were trying to get involved in a scandal with drug companies, politicians who cut public spending on drugs! And those who, at the time we cut the waste, were trying to support the drug companies. As if they wanted to “punish” us for just that!

–It is impossible, finally, because it was so bad, so stupid, so in violation of both the Criminal Procedure and the Constitution! The gang started as a micron gang – as a group of conspirators against the regime. And very soon an omega gang ended up. Baby partnership, that is, incurably stupid. That the more they went to involve their victims, the more they got involved – and they revealed their illegal plans on their own …

Why does this matter?

Because simply none of us started by seeing the conspirators as “enemies”. Political opponents, yes. Enemies, no. And if today we want their punishment, it is because we ourselves did not initially believe that such a conspiracy could be set up against the innocent.

But think about what we went through: To have made such a struggle, in very difficult conditions to save the country from the worst and to go through difficult reforms. And then come people who love us, from our family, or people who know and appreciate us – from Greece and abroad – to ask us what are these accusations of “corruption”. And we have to explain to them the … unbelievable.

What we ourselves could not believe …

Think about what we went through …

I want to thank Andreas Loverdos for this testimony. For what he wrote and for the way he presented them …

I want to thank him for what he was kind enough to write about me.

We do not come from the same place, but in politics true and solid alliances are made between people who make cuts! Difficult reforms, with great resistance. The common struggle builds alliances ….

And this also concerns Andreas Loverdos, of course, but also Vangelis Venizelos.

We came close, because we fought together, for the same purpose, against common opponents and we were targeted by the same conspiracies.

We toppled the conspiracy against us. Now it remains to punish the guilty. All the culprits. To never repeat such a conspiracy. To the end”.

Coronavirus: Beware of festive tables – What a new study shows about contagion in homes

US-Turkey relations in the red: Ankara threatens after S-400 sanctions