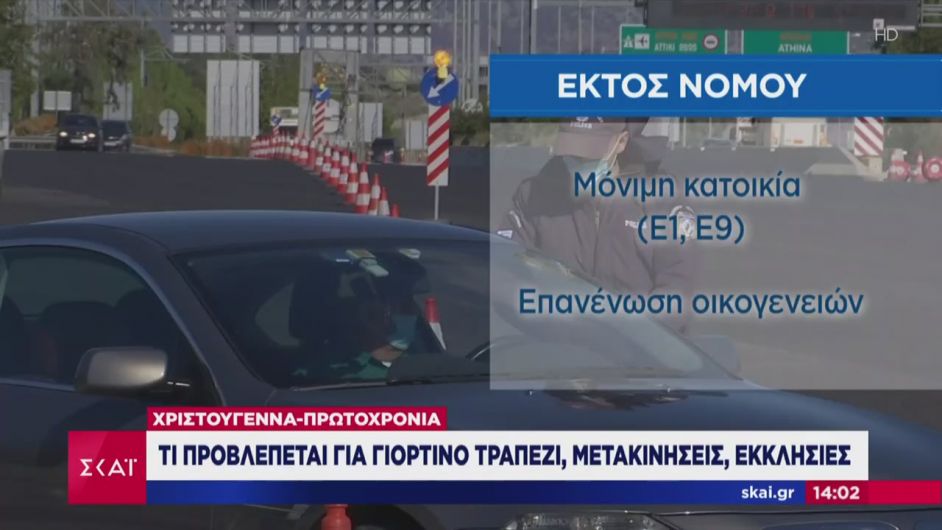 Less than ten days are left for Christmas and it is now clear that this year’s New Year’s Eve will not be reminiscent of those of previous years.

The government has decided that gatherings will be allowed only on Christmas Eve and New Year’s Eve, up to 9 people coming from a maximum of 2 families.

At the same time, according to the Government Gazette published yesterday, although the ban on moving from prefecture to prefecture is still in force, an exception is provided for specific categories:

a) To and from work
b) for health reasons
c) for the purpose of a one-time transfer to the place of permanent residence
d) for going to a ceremony (eg funeral) under the conditions provided by law or going to divorced parents or parents who are in a dimension necessary to ensure communication between parents and children, in accordance with the provisions in force
e) for a one-time transfer of a student from the place of permanent residence to the regional unit where the Department / School of Health Sciences of the University, the School of Officers or the School of Police of the Hellenic Police or the School of Police Flag bearers or the School of Port Guards of the Coast Guard – Hellenic Coast Guard for study purposes.

The movement from and to the Samos Regional Unit of the North Aegean Region is excluded from the application of the present.