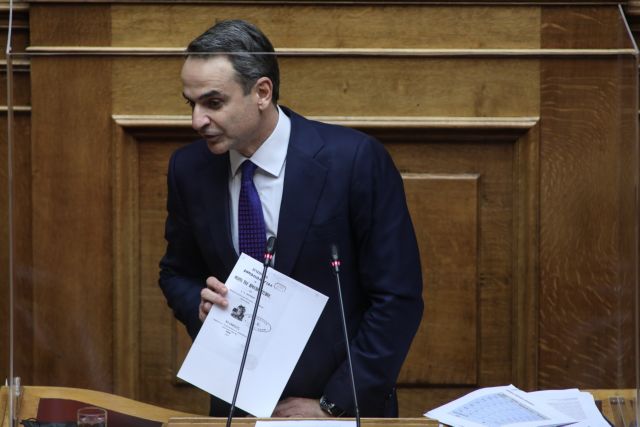 Kyriakos Mitsotakis announced the signing in the next days of the agreement for the purchase of 18 Rafale type aircraft that we will acquire in 2021 from France from the floor of Parliament.

The Prime Minister, making special reference to the forecasts of the budget expenditures of 5.5 billion euros for the Defense, attacked SYRIZA and Alexis Tsipras because he said that the main opposition party will not nominate the defense expenditures.

Mr. Mitsotakis in high tones spoke of a “hypocritical present” when you are “absent from the national front” and even accused SYRIZA of “patriotism with foreign huts”.

The Prime Minister criticized Mr. Tsipras and characterized it as irresponsible and inadmissible, that “he found himself throwing our national issues in the party arena”. Responding to the criticism of the defeat at the Summit as no direct sanctions were imposed on Turkey, Mr. Mitsotakis noted:

“The decisions are clearer than ever in favor of the rights of Greece and Cyprus. “The list of sanctions is being expanded and at the same time Borrell and the EU are being empowered to assess EU-Turkey relations and to propose measures by March at the latest, such as sectoral sanctions and a reassessment of Turkey-Europe relations.”

In the European institutions it is not the national choices that prevail but the common component of the priorities of the European states. That is why the EU is moving like a heavy uranium, the prime minister said, adding that “we have managed to achieve a gradual increase in pressure on Turkey.” In fact, the Prime Minister referred to the sanctions announced by the USA and noted:

“We welcome this decision as a member of NATO and it has not escaped Erdogan’s attention that Turkey is more isolated than ever.”

Regarding the opposition spikes for his statement that the sanctions are not an end in themselves, Mr. Mitsotakis accused Mr. Tsipras of distortion as, as Mr. Mitsotakis stated, “the goal is to drop the tone and change the behavior of Turkey and I insist on it. the position. It is the position and the only policy that can bear fruit for our country “.

Our position is stable. The challenges stop and the discussions begin, said Mr. Mitsotakis, referring to the possibility of exploratory contacts and their “immediate and smooth resumption”.

As Mr. Mitsotakis addressed the opposition, he noted that “the result of this behavior is that Turkey is facing sectoral sanctions. “In October, we did not expand the list.”