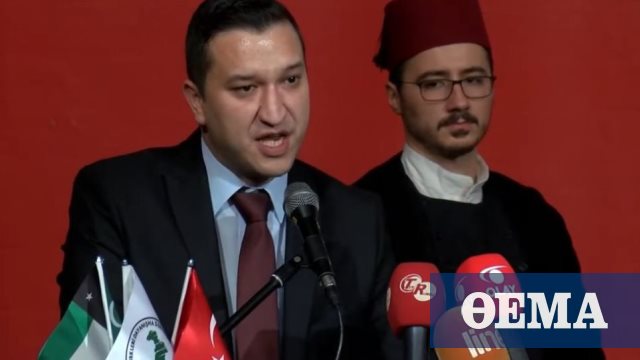 Mayor of a Greek municipality, promotes on social media significant funding provided by the Ministry of Environment and Energy, in Turkish!

The speech for the mayor Iasmos Rodopi Oder Mumin, who uses the Turkish language on social networks, in an effort to impose it on public administration, alongside Greek. He is even projected as Yassıköy Belediye Başkanı. That is, mayor of Yassıköy in Turkish.

Recently, the municipality of Iasmos joined the “Urban Renewal” program of the Green Fund – implemented by the Ministry of Environment and Energy – securing 170,000 euros for the supply of 10 semi-underground bins for waste and recyclable materials.

The mayor, overjoyed, announced on social media the securing of funding from the Greek state in ικά Turkish, not even respecting the pretexts, and not respecting how most of the inhabitants of his municipality are Christians.

From the Green Cash Program, at € 170,440, our 20-Place Garbage Can was launched online. This is the first place in 11 municipalities in Greece to include this program … pic.twitter.com/dsElnUozuX

People who know people and situations within the hard-core Turkish-speaking core of the minority, comment to protothema.gr that Mr. Mumin’s Turkish posts are not only intended to prove his deep faith in Turkey, moreover, with the support of the Turkish consulate he was elected mayor , but mainly to be imposed as a leading figure in the field of minority. Although the latter is directly disputed.

Last February, the mayor of Iasmos attended a Turkish fiesta of the Bursa branch of the leading redemptive “Turkish Solidarity Association” of Western Thrace “. During his greeting and, according to a video that was made public, Mr. Moumin referred to his vision of how the municipality he governs “will embrace the motherland” – that is, Turkey – gave assurances that although he graduated from a Greek High School and University has not lost any of its “Islamism and Turkism”, accused the minority opponent Mr. Kadis Ismet that he opposes him “in unity with the Greek”, (meaning the leader of the opposition Mr. Kyriakos Amoutzas) getting to the point of talking directly about… “known enemy opposite”, reciting at the end and verses of a poem, dedicated to the Turkish soldier.

Protothema.gr, at that time, had highlighted the provocative behavior of Mr. Moumin, with a relevant article entitled: “Minority mayor of Iasmos: He also recited a poem about the” glorious Turkish soldiers “”