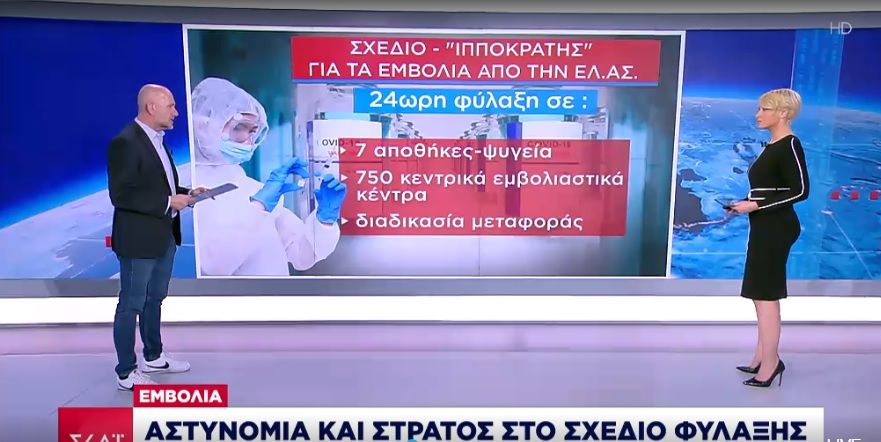 An alarm prevails in the police for the guarding of the stocks of vaccines and thus the “HIPPOCRATES” plan for the operation “ELEFTHERIA” was created.

This is a detailed security plan, prepared by the Hellenic Police, to guard the storage and transport of coronary vaccines to vaccination centers.

The “HIPPOCRATES” plan for the company ELEFTHERIA of the supply of vaccines and the mass vaccination of the population includes the following:

From these refrigerated warehouses will be distributed to:

This is a big plan that the minimum number of police officers required per 24 hours in each storage area, vaccination center and transportation is between 6-10 police officers.

That is, the following are required:

At the same time, a single business center will be created, possibly at the General Secretariat for Civil Protection with links from the Hellenic Police, Fire Brigade, Army, Coast Guard, which will receive the data of the Ministry of Health, which will concern the number of storage facilities and vaccination centers per prefecture and region, as well as from where and when they will be distributed and transported in order to draw up an emergency plan for guarding the facilities and the security escorts for transporting the vaccines.

The preparations in our country for the start of FREEDOM are feverish, as the vaccination campaign against the coronary was called. The first vaccinations in Greece will probably start even before the New Year.

With Pfizer having halved its production by the end of the year, due to lack of raw materials, our country is expected, according to Stelios Petsas, to initially receive just over 300,000 doses, reduced by about 40% compared to the initial estimates.

“Because as we can see there is a limit to the number of vaccines available. Someone with an antibody titer may not get the vaccine and someone else who needs it may do so in order to achieve herd immunity as quickly as possible,” he said. for the coronation Dimitris Filippou, President of EOF.

“My appeal to them has to do first of all with their own protection through vaccination and equally important with the protection and safety of patients in hospitals,” said the Minister of Health, Vassilis Kikilias in today’s briefing for the pandemic in our country.

The most critical point is the successful distribution of the vaccine from the warehouses with the freezers to the 1,018 Vaccination Centers. (GFX) For those citizens who are unable to give oral consent such as people with mental retardation, dementia or mental illness, a family member or legal aid will fill out this consent form confirming that they have been informed of the vaccine and any its side effects.

Even greater will be the enhancement of public health with the availability in our country and treatment with monoclonal antibodies.

“Based on the indications we have, it is probable that in the first months of 2021 we will be able to make these drugs commercially available in Europe,” said Mr. Filippou.

The Pfizer / BioNTech vaccine is expected to be approved by the European Medicines Agency by 23 December, so that vaccinations are possible, possibly from 27 December onwards.

“70% of the population needs to be vaccinated. It’s a huge business. “So let’s start vaccinating together as early as possible, at 27, starting on the same day as we went through the whole pandemic in unity,” said European Commission President Ursula von der Leyen.

In the United Kingdom, more than 137,000 people have already been vaccinated in the first week of the program. Anesthesiologist George Sakellion, who works at Colchester Hospital in Essex, was also vaccinated on Monday.

He will not forget the first patient with covid treated in the hospital. A 50-year-old man without serious underlying diseases.

“He came to the outpatient clinics with a picture of shortness of breath, was intubated the same night and ended up in 36. The strange thing was he was the first patient and the only patient, it was not that the system could not cope or support him. All the doctors of the unit had fallen on him. There was nothing that could be done. It was a great feeling. I was trying not to have my mind in fear. But I do not hide that living in another country away from loved ones away from your own, you are afraid that you will get sick, you will be in the intensive care unit, you may end up and no one will be able to communicate with you. They should not know where you are and how you are “noted Mr. George Sakellion, anesthesiologist at Colchester Hospital.

Vaccinations in the United States continue at a rapid pace, with regulatory authorities and approval for the Moderna vaccine expected within the next few days.