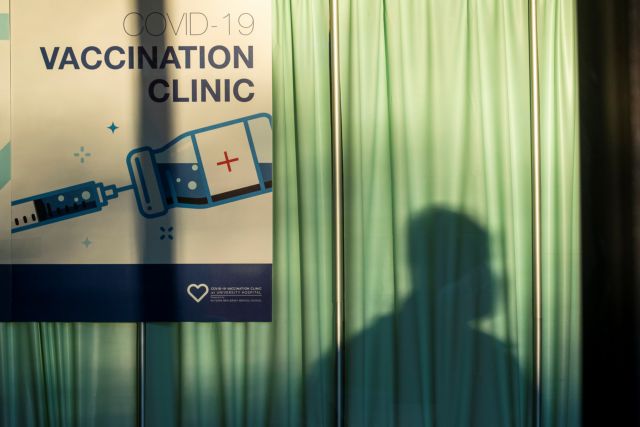 The decline of the coronavirus pandemic in our country continues at a very slow pace, as on Tuesday the number of daily cases appeared increased, compared to that of Sunday and Monday.

In the last 24 hours, 1,240 cases of coronavirus were announced by the National Organization of Public Health (EODY). However, it should be noted that yesterday’s number of cases resulted from the conduct of almost 33,000 tests. Based on these data, the positive rate of tests yesterday was 3.7%, a slightly lower rate compared to previous days.

At the same time, the high number of deaths remains unbearable, reaching 100 again in 24 hours, with the mortality rate having risen dangerously in the second wave of the pandemic, ranking the country at the top of this sad list.

It is now a given that the epidemic wave is escalating dramatically slowly, despite the fact that we are in the sixth week of lockdown.

When will we see a significant drop in numbers

For scientists, only the vaccine gives real hope. However, according to the models they have in their hands, if the epidemic wave continues to evolve in the next period of time as it does now, then the number of intubated people may have dropped to 300 during the holidays (from 550 now).

Experts estimate that it will take another week to see a drop in cases and deaths.

The launch of the mortality rate in our country during the second wave, which reaches 3.1%, causes intense concern and concern. The vertical increase of this index is also evidenced by the CDC chart that shows Greece in second place in terms of mortality index, approaching Belgium.

According to the chart, the mortality rate in our country until December 14, 2020 was 2.9%, while in Belgium it has reached 3%.

Sweden, Portugal and the Netherlands follow, with the latter having a 1.6% positivity index, a percentage that we had before the “arrival” of the second wave in our country.

In fact, Greece has almost twice the mortality rate compared to other European countries, such as France, Italy and Britain.

With these data, the extension of the lockdown in the field of catering and the first two months of the new year was essentially announced by the Prime Minister Kyriakos Mitsotakis from the floor of Parliament during the debate on the 2021 Budget.

The announcement of Kyriakos Mitsotakis for a reduction of rent by 80% in retail, catering, but also businesses in the field of culture and sports shows that it will be difficult to lift the measures, especially in the field of catering.

“Because I have a responsibility to listen to the anguish of the market and because I know that many businessmen and restaurants, as well as shopkeepers had invested a lot this Christmas season and in consultation with the financial staff, I would like to announce today another protection and relief measure. for all companies affected by the restrictions. That is, those that will remain closed by order of the state during the holidays, from retail to catering, culture, sports. “The rent for January and February is reduced by 80%,” said the Prime Minister.

It is worth noting, however, that Prime Minister Kyriakos Mitsotakis has stated that bars and nightclubs will not open until the vaccines arrive.

Open only in the “green” areas

The Minister of Development, Adonis Georgiadis, also mentioned the extension of the measures in the area of ​​catering, speaking to KRITI TV, saying that the suggestion of the experts is not the same for the restaurant, since, as the minister said, this is a place where No1 is recorded outbreak of coronavirus, despite the fact that traders complied with the measures.

Mr. Georgiadis even said that if conditions allow, Crete could open after January 7, explaining that this did not happen at this stage because the prefectures of Chania, Rethymno and Lassithi are in the green, but Heraklion is still located. in the “orange” of increased surveillance.

He said that the green regions also include the Peloponnese and the Ionian Islands.

The holiday season is crucial

Experts consider the period of the holidays until the vaccinations come to be crucial. “The outbreak of the virus during the holidays should be avoided so that we can open in January and not have to be led to an extension of measures after January 7,” the rector of EKPA, Thanos Dimopoulos, pointed out on Tuesday.

Speaking to MEGA, he stressed that it is necessary to limit the number of people at New Year’s Eve, because otherwise there is a risk of spreading the virus from asymptomatic.

He needs patience for a few days until the vaccination starts, he underlined. When the vaccinations start we will have a “road map” for how we will move next. However, the restrictive measures will remain for a while and will be lifted gradually, he noted.

According to experts, home concentrations are hotbeds of the virus. In fact, it has been estimated that only 8 minutes is enough to transmit the virus indoors.

That is why experts are sounding the alarm for New Year’s Eve and some are very wary of family dispersal, clarifying that the safest option would be to choose to stay home without guests.

“Our homes, the enclosed spaces, are important factors of dispersion. One player can stick to everyone. If in an apartment of 120 square meters and 20 people gather, even with a mask, it can be dispersed. If they do not wear a mask, only 8 minutes are enough for the spread to take place “said Vana Papaevangelou, pediatrician – infectious disease specialist during the regular information, on Monday, about the course of the virus.

Professor Gikas Majorkinis also recommended attention to the festive gatherings, emphasizing that the safest option is not to meet people from other households during the holidays.

As he explained, it would be logical for something like this to happen during the holidays, however, this should be done very carefully, with hygiene and protection measures for all of us.

“If we choose to meet, there are simple instructions for safer meetings,” he said.

“If we have symptoms, of course we should abstain. It would be good to wear a mask. It is understandable that it is not always possible to wear, but we must protect the most vulnerable. “If we visit grandparents, the sick or other people who are in vulnerable groups we must definitely wear a mask.”