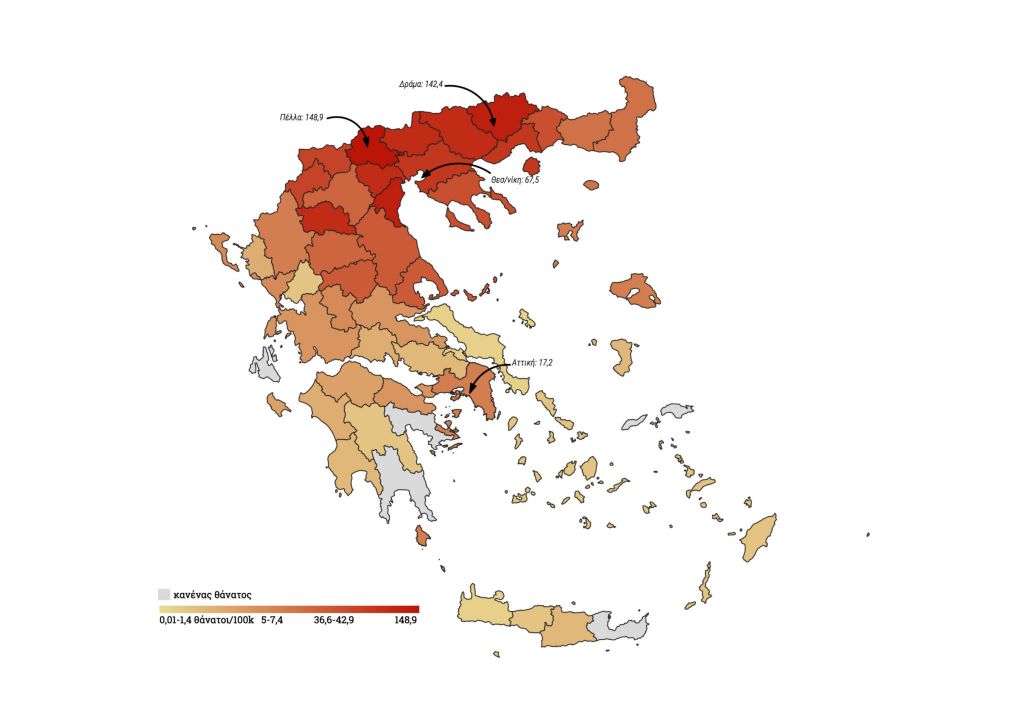 With the death toll from coronavirus in our country having reached 3,870, iMEdD presents for the first time the geographical distribution of deaths in Greece, in contrast to EODY which provides data only for the distribution of cases.

Indicative of the severity of the second wave of the pandemic and the criticality of the situation is the fact that out of a total of 3,870 dead, 3,061 were “lost” from November 1st to December 14th. In December alone, until yesterday, December 15, we had 1,379 deaths from Covid-19.

According to the authors of the study, anonymous data were collected for the geographical distribution of 3,214 deaths per Regional Unit since the beginning of the pandemic (corresponding to 87% of the 3,687 total deaths as of December 14).

Northern Greece mourns most of the dead

The analysis of the data shows that the areas with the most deaths are:

However, the reduction in deaths per 100,000 population (a calculation that allows us to compare areas with each other) shows that the areas most affected by the pandemic are:

The map with the geographical distribution of pandemic deaths

In the map below you can see, in addition to deaths per 100,000 population, mortality (deaths per confirmed case).

The mortality rate shows us how many of those who have been diagnosed positive for coronavirus have lost their lives. Although mortality is a very important indicator, we should read it very carefully.

This is because the number of people diagnosed with COVID-19 does not correspond to the actual population that has contracted the virus. This is because, on the one hand, the whole population is not tested and, on the other hand, because those who are tested are usually people who have already had some symptoms.

For these reasons, the mortality rate may be overpriced compared to the actual risk of death from COVID-19.

Ratio of deaths per population in the world

The launch of the mortality rate in our country during the second wave, which reaches 3.1%, causes intense concern and concern.

The vertical increase of this index is proved by the following diagram that shows that Greece has now reached the level of Belgium.

In fact, Greece has almost twice the mortality rate compared to other European countries, such as France, Italy and Britain.

Three deaths per 1,000 cases – Comparison with other countries

In Spain this number is 17 per 1000 institutions, in France 17, in Italy 19 and in Great Britain 18. Something that is attributed to the domestic infection of elderly people living with relatives, to the burden of the health system despite the efforts of doctors and nursing staff and for other reasons.

What is the reason for the increase in the mortality rate?

The sad record in the mortality rate causes terror but also many questions, reheating the discussion for a large underdiagnosis of cases, due to the few tests performed, as well as for untimely and incomplete treatment due to the pressure on the NSS and of course the severe shortages. mainly in the hospitals of the Region.

These reasons in combination with the absence of organized primary health care largely explain -according to experts- the negative development in the mortality rate.

An interesting observation is made by iatronet.gr, pointing out that it does not appear that the increased mortality rate is at least strongly linked to the fact that Greece is one of the oldest countries in Europe.

He adds that comparing countries with high mortality rates does not show a strong correlation between the two factors, as countries with young populations such as northern Macedonia, Romania and Poland figure in the top places in mortality, as opposed to older countries such as Germany. and Portugal or even Belgium (which has been accused by Amnesty International of being indifferent to older structures) are at much lower rankings.

On the contrary, he notes, there is a very strong correlation between the high mortality rate on cases and the comparative ranking of European countries based on the diagnostic tests they perform.