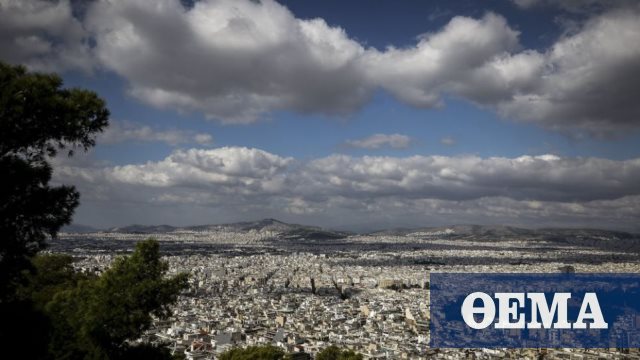 In the west generally clear weather. In the rest of the country clouds are forecast temporarily increased, with local rains in the east and south and mainly in the morning in the southeastern island country individual storms. The effects from the afternoon will be limited to Crete and in other areas the weather will improve. The winds will blow from northern addresses in the west 3 to 5, in the east 4 to 6 and in the Aegean 7 locally 8 beauforts.
THE temperature will note small rise mainly in the west.

Winds: From north 3 to 5 and in the Ionian in the morning locally 6 beaufort.
Temperature: From 05 to 18 degrees Celsius. In the interior of Epirus 4 to 6 degrees lower.

Weather: In the eastern Peloponnese a few temporary clouds. In the rest of the regions clouds temporarily increased with local rains mainly in eastern Sterea and Evia. Improvement in the afternoon.
Winds: From north 5 to 7 and east in the morning locally 8 beaufort. Gradual weakening in the afternoon.
Temperature: From 07 to 16 degrees Celsius. In the north the minimum is 2 to 3 degrees lower.

Weather: In the north a few clouds temporarily increased until noon. In the south increased clouds with local rains and mainly in the morning isolated thunderstorms.
Winds: Northeast 6 to 8 Beaufort. In the south southeast 4 to 5 that will gradually turn to north 5 to 7 Beaufort.
Temperature: From 11 to 19 degrees Celsius. In the north the maximum is 3 to 4 degrees lower.

Weather: Cloudy skies temporarily increased with local rains mainly in the east and north. Gradual improvement from the afternoon.
Winds: North 4 to 6 and in the east local 7 Beaufort.
Temperature: From 10 to 15 degrees Celsius.

Weather: Generally clear with a few temporary clouds in the morning.
Winds: North northwest 4 to 5 and temporarily in the morning 6 Beaufort. From noon they will weaken.
Temperature: From 08 to 12 degrees Celsius.

In central and eastern Macedonia, Thessaly, the Sporades, Evia, eastern Sterea and Crete, clouds are forecast temporarily increased, with light rain mainly in northern Crete in the morning. In the rest of the areas a few local clouds but also periods of sunshine.
Visibility in the morning and evening on the mainland will be limited in places and in the north fog will form.
Winds to the west will be weak. In the east they will blow from north 3 to 5, in the Aegean 6 and temporarily locally 7 beauforts with weakening from the afternoon.
The temperature will rise slightly in the central and northern continents in terms of maximum values. Early in the morning on the northern continents there will be frost in places.

In central and eastern Macedonia, Thrace, Thessaly, the Sporades, Evia, eastern Sterea, eastern Peloponnese, Cyclades and Crete, local clouds are forecast temporarily increased with a few light rains. In the rest of the country generally clear weather with light clouds.
Locally limited visibility or fog in the morning and evening hours on the mainland and the Ionian.
The winds in the Ionian and the mainland will be weak, in the Aegean they will blow from north 3 to 5 Beaufort.
The temperature will not change significantly. Frost will occur on the northern continents early in the morning.

John Le Carre: The spy who came back from the cold is no longer here

The platform for reintegration in 100-120 installments was opened