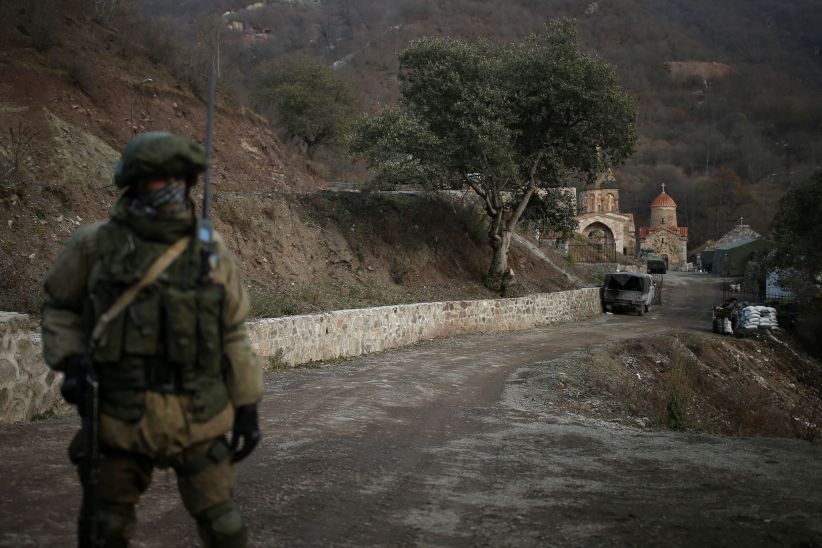 Two elderly Armenians have been beheaded by Azerbaijani forces, and videos shared widely on social media confirm only two of the bloodiest atrocities of the recent war in Nagorno-Karabakh, the British newspaper reported.

The two elderly Armenians were not fighters, people said in the villages where they lived. Both were beheaded by men wearing Azerbaijani military uniforms. The short, gruesome videos of the killings are among the worst of a torrent of videos depicting abuse, torture and killings that continue for more than a month after the ceasefire.

In videos posted on the Internet on November 22 and December 3, men in Azerbaijani army uniforms hold and behead a man with a knife. They then place the severed head on a dead animal. “That’s how we get revenge – by beheading,” says an off-camera voice.

Two residents of Madatashen village, Nagorno-Karabakh, identified the victim as Genadi Petrosyan, 69, who had moved to the village in the late 1980s from the Azerbaijani town of Sumgait.

Gayane Petrosyan (unrelated), head of the local school, lived right across from Petrosyan’s small house. He said his father had helped install the village electricity and said of one of the videos: “I could see his face clearly and I could recognize that it was him.” The Guardian has also seen a photo of Petrosyan that looks very much like the victim in the video.

Genadi Petrosyan, who lived alone, did not want to leave the village when Azerbaijani forces blocked it. When a neighbor tried to drive him away, he got out of the car and walked to his house.

Eduard Hayrapetyan, the village leader, said he had known Petrosyan for more than three decades and considered him a close friend of his family. He received his last phone call from Petrosyan on the morning of October 28, to say that he had seen enemy forces in the village. Then, after weeks of silence, the video appeared. “I feel very sad that I took him away from the village and then he came back and that happened,” Hayrapetyan said.

Artak Beglaryan, a human rights ombudsman for the local Armenian government, said Petrosyan had been identified after “combing” 35 missing persons reports in the area and then contacting acquaintances, who confirmed his identity. He called for greater efforts by the international community to investigate crimes in conflict. “Western countries have been silent and have not taken practical measures,” he said. “They have a duty and means to talk about it … we do not see any results, we do not see any process.”

Siranush Sahakyan, a human rights lawyer, also confirmed Petrosyan ‘s identity and said she and a colleague, Artak Zeynalyan, were preparing a criminal investigation into the murder.

“Emotionally, it is difficult to watch the videos. From a professional point of view, it can be very useful proof,” Sahakyan said, noting that they had to check the videos carefully to make sure they were not fake.

Amnesty International has called on Armenia and Azerbaijan to investigate videos of beheadings and desecration. The agency has used digital verification techniques to authenticate the videos examined, as well as videos of the killing of an Azerbaijani border guard who had his neck cut off. Other videos show soldiers desecrating the corpses of enemy fighters.

“Armenians and Azeris are watching these videos day by day and every day there is a new video,” said Tanya Lokshina, a Human Rights Watch researcher who prepared a gruesome report on abuses against released Armenian prisoners of war. “These also lead to increased levels of hatred. Even now, when the battle is over.”

Some of the most horrible and widespread videos were also some of the most difficult to confirm. A video posted on the Telegram application on December 7 showed two soldiers in Azerbaijani army uniforms nailing an elderly man near a tree. Another soldier passes a knife to one of the attackers, who begins to cut the victim’s throat. The victim’s head begins to separate from the neck before the video ends.

Three residents of Azokh village identified the victim in this video as Yuri Asryan, an 82-year-old man who refused to leave the village on October 20 as Azerbaijani forces approached.

“He did not communicate much with others. He just refused to leave,” said Georgi Avesyan, the village leader until 2019 and one of the people who identified Asryan. Said that
it was possible that Asryan did not fully understand what was happening.

Azerbaijani forces entered the village a few days later and remained under Baku control under the November 9 ceasefire agreement.
There was no news of Asryan’s fate until a 29-second video surfaced last week on social media. Araik Azumanyan, the current head of the village, said: “I received calls from many people from the village, even from people who had moved from the village to Armenia many years ago saying that he looked like the Asryan in the video.”

A third villager who identified Asryan said: “I felt awful after seeing it, my blood pressure was high, I could not recover for a week after seeing it.”
Beglaryan, the ombudsman, and Sahakyan, a human rights lawyer, also confirmed Asryan’s identity. His closest relative, an elderly sister who visited him occasionally, knows that Asryan died but has not seen the video. Asryan’s niece also confirmed to the Guardian that he was in the video.

Azerbaijan’s attorney general last month launched a public investigation into war crimes from both Baku and Yerevan. He made the first arrests on Monday, detaining two Azerbaijani soldiers. No criminal cases have been opened in public against beheadings.

There are hundreds of other videos on the internet. Sahakyan said she and a colleague were preparing 75 cases of captured Armenian soldiers and civilians at the European Court of Human Rights, including 35 that included video evidence. On Monday afternoon, the two governments held a mass exchange of detainees, media reported in both countries.

In another video, a villager named Kamo Manasyan is kicked and punched while bleeding from his right eye.

“How many more of you are here,” his interrogator shouted in a strong Russian accent, aiming a rifle at Manasyan’s head. “Shoot me if you want,” Manasyan replies. The man hits him with the rifle.

“It was difficult to watch this video with such cruelty,” Gagik, his nephew, said in a video call. “I think they just want to show their success in this war and humiliate the Armenians, to show that they have won.” Manasyan’s sister, Nora, can’t wait to watch the video. “I want the prisoners of war to return as soon as possible,” he said in tears. “I want peace.”