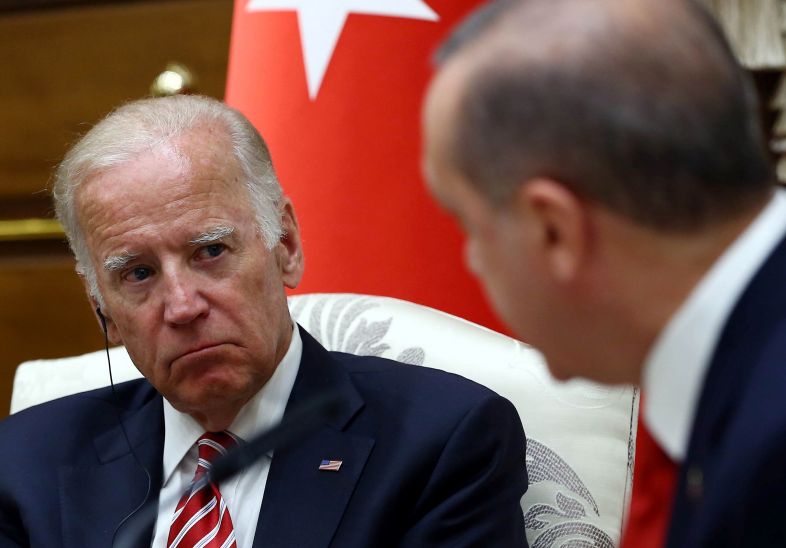 Describing the US-Turkey relationship as a “slow-moving train collision”, Danforth stressed that US President-elect Joe Biden has no room for moral compromise with Erdogan’s Turkey, making it clear that targeted against working with you ”.

In this context, the columnist calls on the US to put constant pressure on Ankara to show that competition from its former allies has consequences.

If, as analysts point out, the US-Turkey relationship looks like a slow-moving train collision, the good news is that trains are moving slower than expected. The bad news is that they continue to be directed at each other on the same rails. President-elect Joe Biden is now in the unenviable position of the braking driver… and cannot expect much help from his counterpart on the other train.

For Biden, the challenge will be to minimize the damage that Turkey can do to US interests without provoking further conflict or ruling out future co-operation. His work must begin with the assumption that Washington can not save the US-Turkish alliance alone, nor will Erdogan ever offer a real restoration of relations – no matter how many times he seems to do so. The United States and Turkey will continue to work at multiple levels and there will continue to be more crises. If everyone is lucky, there will also be breaks and some progress in areas of common interest.

For the best strategy in this win-win situation, Washington should be clear about Turkey’s role in US foreign policy, as well as its own role in Turkish domestic policy: It will be almost impossible to work with Turkey. when the Turkish government sees the United States as a threat, and it will be difficult to support Turkish democracy when so does much of the Turkish opposition.

There have been a number of explanations as to why Turkey has taken a more confrontational approach to the United States and its other Western allies in recent years. Some analysts have pointed to the domestic political benefits that Erdogan derives from his anti-Western stance, especially now that he is in an electoral alliance with Turkey’s supranationalist party. Others have highlighted the role of Erdogan’s Islamist ideology and ambitions for hegemony in the Muslim world. Others point to a number of specific Turkish grievances, such as Washington’s support for Kurdish fighters in Syria or its refusal to extradite Turkish preacher Fethullah Gulen to Turkey, arguing that they explain or justify Turkish hostility.

There is great truth in all these explanations. And that, in itself, is reason to suspect that the approach can be difficult. On their own, however, they do not highlight the full scope of the challenge. The most troubling reality is that ideology, grievances and domestic politics have jointly shaped a new Turkish security dogma which, in a coherent or not necessarily precise way, identifies the United States as a major threat that must be overcome aggressively countermeasures.

Turkish pro-government analysts were eager to highlight the thought of Turkey’s new foreign policy. They believe that Western powers are worried about Turkey’s newly gained independence and are therefore working on several fronts to control the country’s rise. And yet, as Western power dwindles and the world becomes more multipolar, they also believe that Turkey can use “hard power” and selective cooperation with Russia to rewrite the rules of the game in its favor.

This approach to the world is popular with Erdogan’s voters, fits well with the president’s ideological assumptions, and has received enough external validation to be difficult to discredit. For Washington, taking Turkey’s new foreign policy seriously means accepting that no combination of threats or incentives will restore a partnership soon. Instead, US policymakers face a longer-term challenge to refuting the assumptions that guide Turkish policy. This will require constant pressure to show Ankara that competition from its former allies has consequences. But it also demands that the door be left open to de-escalate if Ankara decides to do so. In other words, policymakers should not resort to any reconciliation agreement by Erdogan or see his offers of restart (relations) as a reason to bow to Ankara. At the same time, they must recognize that negotiations and working groups can play a valuable role in putting problems on the ice, even when neither side expects them to be resolved soon.

Indeed, given Washington’s growing frustration with Erdogan, some have already concluded that real cooperation with Turkey will only be possible when Erdogan leaves power. There is certainly reason to hope that a government led by Turkey’s main opposition Republican People’s opposition would be less competitive with the United States and the EU. Egypt, while showing less enthusiasm for other regional actors such as Hamas. However, there is also reason to believe that the Turkish opposition shares many of the government’s suspicions about Washington and supports many of Erdogan’s efforts to do so. Moreover, if they come to power, they will almost certainly face new political pressures, demanding that they prove their nationalist credentials.

Of course, one of the main reasons that both Erdogan and his opponents are suspicious of Washington is their common belief that US support for democracy in Turkey always depends on what the Turkish internal system can mean for United States. Washington’s history of the Cold War certainly shows that its approach to Turkish democracy often revolved around parties that believed it supported American interests. The result is that, today, explicit support for the Turkish opposition is not necessarily the best way to support the Turkish opposition. Last summer, a video was released showing Biden in an earlier interview with the New York Times editorial staff, which called on the United States to encourage those in Turkey to work to overthrow Erdogan through the election process. Almost immediately, both Erdogan and Turkish opposition leaders rushed to condemn Biden’s comments. They denounced US interference in Turkey’s internal affairs and insisted that they would not take part in the imperialist game in Washington.

This reaction speaks to a deeper division between Turkey’s nationalist opposition over how they believe Washington can best help their country. Insisting that “Turkey is bigger than Erdogan”, many of Erdogan’s opponents argued that Western countries should not punish all of Turkey because of their anger at the leader. They argue that to avoid losing 50% of Turkey that hates Erdogan, the United States and the EU should offer Turkey improved trade opportunities instead of sanctions as they work to address broadly common Turkish concerns about the Gulen movement. , the YPG and the Eastern Mediterranean. The problem, of course, is that other more sincere members of the opposition insist that this approach would only strengthen Erdogan to their detriment. Giving Erdogan high-profile foreign policy victories, they insist, only gives him more courage. And avoiding sanctions on Turkey, much less providing measures such as a revised customs union with the EU, gives Erdogan vital financial support to maintain his authoritarian role.

In view of these contradictory expectations, Biden simply needs to be consistent in his criticism of Erdogan’s anti-democratic behavior. It must condemn the arrest of Erdogan’s democratic opponents and push for the release of political prisoners. That in itself would be a welcome change, both from Erdogan’s desperate moral embrace with the outgoing US president, and from the occasional willingness of former President Barack Obama not to be critical in the hope of securing Ankara’s co-operation. . The president does not need to openly support the opposition, but he should also not hesitate to respond to Erdogan’s foreign policy challenges in the hope of winning their sympathy. Ultimately, separating US support for democracy from their specific geopolitical ambitions may be the best way to show that Americans really support Turkish democracy for their own good.