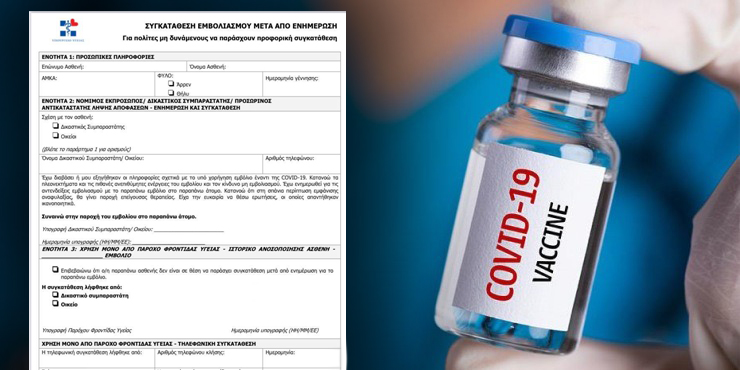 Citizens who will be vaccinated in the near future in Greece, will have to sign a form confirming that they have been informed – among other things – about possible side effects and the risk of non-vaccination.

The form has already been sent by the Ministry of Health to 1,018 vaccination centers across the country and is the mandatory consent of citizens before vaccination.

As provided in the instructions sent to the vaccination centers and prepared by the Ministry of Health in cooperation with the National Vaccination Committee, the citizens who will agree to get the vaccine for Covid-19, should give their consent, which will ensure that they have been fully informed about the procedure and possible side effects, as stated in the document published by iatropedia.gr .

In the event that a citizen is unable to provide oral consent to the vaccine, the document must be completed by a family member, caregiver or legal aid.

In recent days, the whole of Europe has been eagerly awaiting the approval of the Pfizer vaccine – on 21 or 23 December – in order to start distributing the vaccines to all EU countries.

As it became known, the European countries – immediately after the approval of the vaccine – will start the vaccination on the same day, as revealed by the President of the European Commission Ursula von der Leyen.

Her statement came amid pressure from the EU to “follow” the United States and Britain, which have already begun vaccinating citizens.

The 27 countries of the European Union will be able to “start the same day” the vaccination campaigns against Covid-19, once the green light of the European regulatory authority for the vaccine developed by Pfizer / BioNTech is given, he pointed out before the European Parliament and added:

“Eventually, within a week, the first vaccine will be approved, so vaccinations will be able to start immediately; it is a huge undertaking.”

“So let’s start this vaccination campaign as soon as possible, all 27 of us, starting on the same day,” she said.

The pressure on the European Medicines Agency

According to the latest data, the European Medicines Agency (EMA) – following pressure from the European Union – is speeding up the meeting to decide on the Pfizer / BioNTech vaccine.

While the meeting was scheduled for December 29, which meant that the first doses of the vaccine would be available from the beginning of next year, eventually the committee responsible is expected to take decisions on December 21, raising hopes. Βασί Santa Claus to bring the vaccine in the next few days.

“Following the receipt yesterday, Monday afternoon, of additional data requested by the Coreper Medical Committee (CHMP) from the company and pending the outcome of its evaluation, an extraordinary meeting of the CHMP is scheduled for December 21, in order to reach a decision. , If its possible. The meeting scheduled for December 29 will be maintained if necessary “, stressed EMA in its announcement.

“It is possible that the first Europeans will be vaccinated before the end of 2020,” Commission President Ursula von der Leyen wrote on Twitter yesterday after the announcement of the decision of the European Medicines Agency.

“300,000 doses of the vaccine will be available in the first month in Greece”

“Three hundred thousand doses of the coronavirus vaccine will be available in our country in the first month, which means that 150,000 citizens will be vaccinated in January,” government spokesman Stelios Petsas told Parapolitika Fm, urging citizens to be particularly be careful during the holiday season so that there is no resurgence of cases.