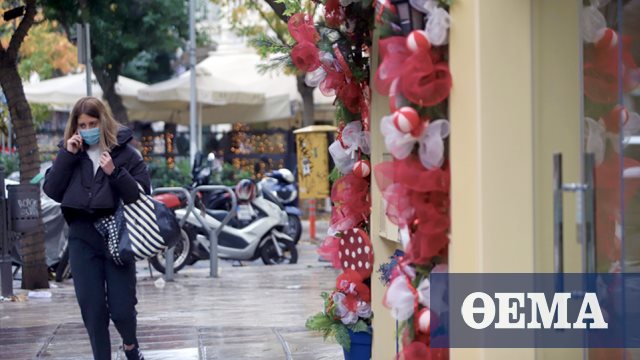 A first relaxation sign appeared on the horizon yesterday, a few hours after the announcement with the Official Gazette of the extraordinary measures that will apply to the holidays, with the Minister of Development, Adonis Georgiadis to turn its pages calendar on January 7, indicating that day as the most prevalent for the first removal of market restrictions.

Given, in fact, that the Prime Minister, Kyriakos Mitsotakis announced yesterday a reduction of rents for commercial housing by 80% with a two-month validity (for January and February 2021), effectively exempting the majority of companies from their basic fixed expense for this period, enables the goal of a full return of retail from the beginning of 2021, even if the effort starts only from the areas with low epidemiological load, as Mr. Georgiadis explained yesterday.

And to reopen, however, the market in regions and prefectures with low viral load (such as Crete, the Peloponnese and the Ionian Islands), categorically opposite appear, according to the Minister of Development, scientists in the face of the possibility of the return of the focus at the same time, assessing the industry as a leading source of coronavirus transmission. All the more so when they treat scientists as such and the festive New Year, many of whom ask for the number of attendees to be strictly limited to the members of each family.

Speaking to SKAI, the Professor of Infectious Diseases, Charalambos Gogos explained that the number 9 does not play any role, pointing out that “at this stage the maximum degree of security is needed”. He, in fact, stated that he has raised the issue and everything Its members agree on the location for holidays only with the family we live in the same house. «Beyond that, if the issue is so major“I imagine they will bring it to the committee to have a final position”, concluded Mr. Gogos.

“It is necessary to limit the number of people because otherwise there is a risk of spreading the virus from asymptomatic,” he said. the Rector of EKPA, Thanos Dimopoulos, recommending patience until vaccination begins. “When the vaccinations start, we will have a ‘road map’ how we will move next, however the restrictive measures will remain for a while and will be lifted gradually. “The goal for the country is to vaccinate 60-70% of the population in order to build collective immunity”, he added. The solution of the “closed” New Year’s Eve is also proposed by the Professor of Hygiene and Epidemiology, Christos Hadjichristodoulou, stating that for the holidays it would be better to do each family alone. “If we relax at Christmas, we will pay for it later,” he warned.

From the government’s point of view, the limit of 9 people on New Year’s Eve“This is an issue related to the social peace, the psychological state of the families, which have been quite burdened lately,” the Secretary General of Commerce said yesterday and added: “But I think in the end each of us, even if we want to invite people to our home, will primarily think about their safety.”

The possibility of celebrating together for two families is expected to increase the travel on the days of the peak of the holidays, which pass through the… mobile. Specifically, especially for the Christmas or New Year’s Eve, it is necessary to send a text message (sms) to the number 13033 with the code 6, so that no fine is charged, in case of going to a friendly house.

Although sending a New Year’s Eve message allows you to leave the house (with a gathering limit of 9 people), the traffic ban remains unchanged all the days of the holidays from 10 pm to 5 am, with no exception on Christmas days. and New Year.

Even if commercial companies set up roller shutters in some parts of the country on January 7, as Mr. Georgiadis suggested yesterday, the masks and possibly also sms will remain in the daily lives of citizens for a transitional period, ie until έ “Freedom” comes. This is the code name of the national vaccination company, to which the Prime Minister, Kyriakos Mitsotakis, referred yesterday. The government’s goal, he said, is to get the vaccine to every corner of the country, to every Greek man and woman, free of charge and safely. For this reason, the Prime Minister referred to a “complex exercise” and referred to the 1,018 vaccination centers and the 65 mobile units.

Mr. Mitsotakis also estimated that “maybe the European Organization will give its approval a week earlier, so we must be ready for this exercise”, launching for this reason a communication “campaign” in the next period, in which the government will benefit everyone. “We will succeed. But the threat will lurk until the 60% vaccine population and therefore the commitment to measures should continue. We will wear a mask during the vaccine and we will wear a mask after the vaccine “, the Prime Minister clarified, emphasizing that the vaccination marks the beginning of the end:” Our freedom and that is why we will call this company. The freedom to live liberated from the hostage of the pandemic, to take back our lives and to celebrate in 2021 the 200 years of our freedom as a nation. It is up to you to get the vaccine tomorrow. “The optimistic next day is really in our hands and I invite you to build it with unity,” he concluded.

In between – and definitely until at 6 in the morning of January 7th– everyday life goes through the pages of the Government Gazette for the “extraordinary measures” of the holidays, which are formed as follows:

Gatherings, public or social events: Suspension, with the exception of:

are allowed the gatherings with a maximum of 9 people, which come from to 2 families.

Public services: Operation with the necessary staff, mandatory teleworking as much as possible, public service only in urgent cases and mandatory by appointment.

ΙLaw Enforcement Companies: Operation with the necessary staff, mandatory teleworking as much as possible, public service only in urgent cases and mandatory by appointment.

Courts: Up to 15 people in the room. Keeping a distance of 1.5 meters.

Hospitals, clinics, clinics and diagnostic centers: one attendant / visitor per patient. Limitation of scheduled surgeries up to 80%.

in the presence of natural persons, 1 per 15 sqm. and with a maximum number of 25 people.

Sanctification of the waters does not take place in any open public space, except inside them Holy Temples.

Rehearsals, TV and film shootings, recordings: only exceptionally and with the permission of the General Secretariat for Civil Protection.

Nightclubs and bars: Suspension of operation

Focus: Suspension of operation. It is allowed to provide products in a package from the store (take away).

Transportation: Public transport with a maximum occupancy of up to 65%, up to 1 passenger in a taxi, up to 2 people plus the driver in the VAN,

Special disinfection on wheeled and non-carts and baskets.

Popular markets: Mandatory expansion, operation with 50% of suppliers and with 5 meters distance from the counters.

Retail: Possibility of delivery outside (click away), but also drive through (pick up by car) for the shopping centers

Hairdressers, manicure-pedicure services: Normal operation, only by appointment and extended hours from 7 am to 9 pm.

KTEO: Customer attendance by appointment only.

Elevators / escalators: It is recommended to avoid use.

Finally, it is allowed from today the activity of producers and professional sellers with flowers and plants in the public markets, according to a relevant decision of the Ministry of Development.