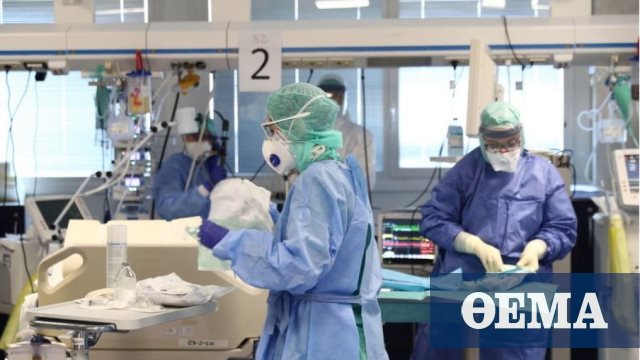 With the look at the start of the operation “ELEFTHERIA”, of the national vaccination campaign for the crown to be expected to start immediately after the holidays, but also in the “fragile” epidemiological picture of the country that reflects the slow retreat of the wave and the pressure received by the NSS, are the scientists and the government.

The 1,240 new cases of coronary artery announced yesterday by EODY A total of almost 33,000 tests show that the positivity rate (3.7%) has declined, allowing some optimism for the outcome of the epidemic.

However, anxiety rather prevails in those in charge – anxiety about the dramatically slow, after five weeks lockdow, case reduction, for the huge pressure on the NSS, the high occupancy in the ICU and the fatigue of the employees. Anxiety about the winter weather that grows the coronavirus transmission chain and can lead to a new wave in January before the current one even recedes. Anxiety if all the rules of this year’s unprecedented Christmas market will be followed and the creation in each family of a small “social bubble”, with a small and stable group of relatives or friends, during the festive days that will restrain the spread of the coronavirus, as recommended by experts.

The data from the NSS available to protothema.gr show the difficult conditions under which the hospitals operate. The “tsunami” of patients in hospitals does not subside easily, and although new imports have fallen sharply since November, the situation has not changed. Indicatively, 255 patients were admitted yesterday, while another 233 were performed last Monday. On both days, the majority of young patients were admitted to hospitals in northern Greece.

The hospitalized yesterday were 3,254, of which 791 in Units (ICU, MAF, MEL etc.). The 1,541 patients with Covid-19 infection were in hospitals in Thessaly, Macedonia and Thrace. Another 501 patients were hospitalized in Attica.

Now, as experts have repeatedly said, their number seems to have stabilized and is expected to decrease significantly by the first week of January – always on the condition that the course will continue to be controlled of the epidemic in the country.

The spread of the virus

And she the week started – and continues – with the negative first of Attica in positive cases. It is recalled that this was recorded last week, except on Friday when Thessaloniki presented more cases.

In the basin 270 new cases of coronavirus were recorded yesterday in Thessaloniki as well, 232, confirming the experts who see a steadily greater decrease in new diagnoses in Thessaloniki compared to the corresponding rate of decline in Attica.

In Thessaly the wave also remains strong of the epidemic with 78 cases in Larissa, 19 in Magnesia, 14 in Karditsa, 19 in Trikala.

High load recorded in Lesvos where 19 cases were confirmed but also in Achaia (19) and Fthiotida (11).

With 6 cases appear in Evia, 6 Thassos, from 1 Zakynthos, Naxos, Paros and Rhodes and another 4 the islands of the Sporades. The confirmation of the cases and the tracing in the island areas is done with a lot of care by the health authorities, as well as the monitoring of the condition of the coronavirus positive people, due to the operational procedure that will have to be followed in serious cases. As happened yesterday with a patient transport that took place from Alonissos under difficult conditions in a hospital in Thessaly.

La Liga, Real-Athletic Bilbao 3-1: Benzema led her to the top-See the goals