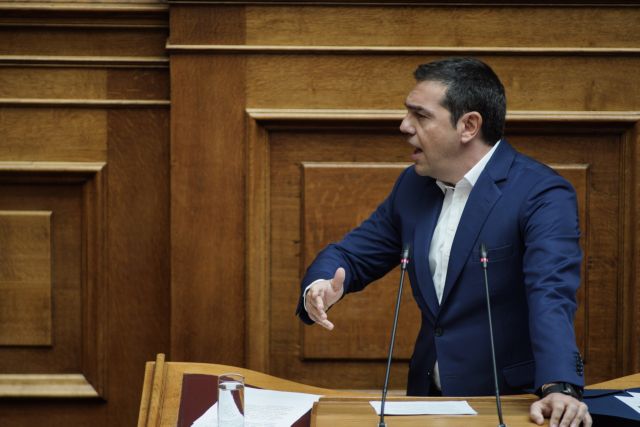 He took a step forward Alexis Tsipras and for the first time since the defeat of the 2019 elections and its rise New Democracy in power, made direct reference to the need to launch political developments in the country.

Its president SYRIZA – Progressive Alliance, indirectly throwing a political bridge at Fofi Gennimata, referred to the perspective of changing correlations at the social and political level.

“Erdogan is the most nationalist leader in modern Turkey”

The former Prime Minister in the shadow of the scenarios for the possibility of leading the country to elections in the spring, on the condition that the vaccination for Covid-19, with his speech on it Budget of 2021 highlighted the need to launch developments due to, as he said, the failure of the current government.

“I listened with interest to the end of Ms. Gennimata’s speech, which was about the need to have, after a change of correlations, another government. To have a progressive government in the country. And I think that is reasonable. Why; Because if they asked me to find a word to describe the management of the government as a whole. That word would be one: Failure. You failed, Mr. Mitsotakis… “.

It was the first time that Al. Tsipras spoke so clearly about political developments, while the positions of three historical executives of the party, Giannis Dragasakis, Nikos Voutsis and Alekos Flampouraris, who moved on the same line, were also of particular interest.

“We must not allow widespread dissent and dissatisfaction to lead to far-right, populist deadlocks. And that is the responsibility of all democratic progressive forces. They must be transformed into a new political plan, a progressive radical plan for the future “, said G. Dragasakis in his speech and added:

“The future does not lie in the privatization of public health, in the lesser welfare state, in authoritarianism and in the curtailment of democracy. The future lies in supporting the public health system and other public goods, strengthening the welfare state, respecting rights, fighting inequalities, strengthening and expanding democracy. After all, these tendencies are developing internationally and signal the progressive way out of the crisis. And this trend will become, is already happening, a majority in society as well “.

Particularly important was the position of N. Voutsis who noted that through the budget the government wants to untie its hands so that it can pass specific anti-social policies at great cost. “The social issue is emerging with a dramatic sign in our country for the next period” he said and continued meaningfully: “The political confrontation and the resistance of the society will intensify, but at least this should not happen with the continuation of this dramatic situation. It will also help our society psychologically to stand tall “.

Al. Also spoke about launching political developments. Flambouraris, who noted that the citizens who are now suffering, “the democrats, the progressive citizens, the young people, those who deceived you, will stop going back” and added with emphasis: “And soon the stopped effort will continue”.

The bill after the pandemic

The report of Al. Tsipras of all three central executives is part of the logic that prevails in Koumoundourou, that the account will be made after the pandemic. Already, the president of SYRIZA – PS had told K.O. that “when the health part of the crisis is over, it will be accounted for and we must be ready to take on our responsibilities for the future of the country”, a phrase that provoked great discussions within the party.

The former Prime Minister has essentially shown with this report that political developments cannot be ruled out, although he estimates that the elections are far away. Of course, as they point out in his staff, nothing can be ruled out and they even emphasize that maybe, if the situation normalizes at the beginning of the year and there is a vaccine, Mr. Mitsotakis wants early ballot boxes to be set up.

Such a perspective is difficult according to Al. Tsipras, as such a development would mean, as he says, a confession of failure, especially when after the crisis there will be social ruins and debris, although no one can predict what will happen. “The country needs a government that wants and can support social cohesion, restore hope and justice,” stressed SYRIZA-PS recently. does not win in the measurements despite the deterioration of the government, although some quality elements are slowly improving.

in the Google News and be the first to know all the news
See all the latest News from Greece and the World, from