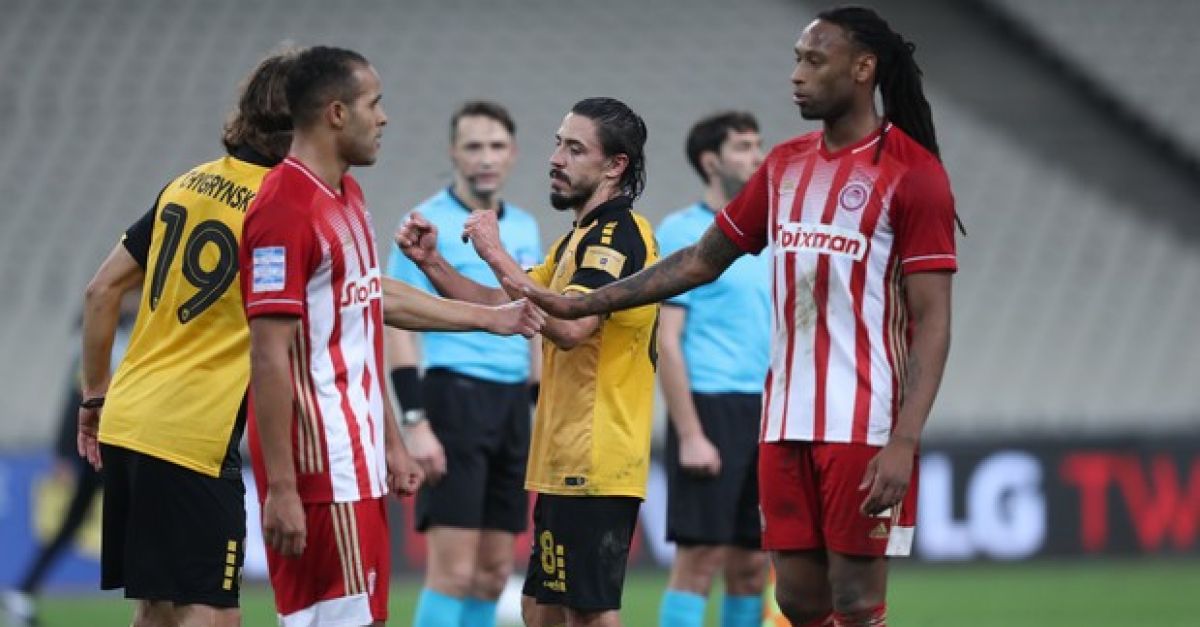 There was no winner in the OAKA derby between AEK and Olympiakos, in a postponed game for the 1st game of the Super League Interwetten (1-1). Brusai made it 0-1 in 55 ‘, Simoes equalized in 80’. Olympiakos remained undefeated and after eleven games is at +3 from the second Aris, at +5 from the third PAOK and at +6 from the fourth AEK.

Martins decided to leave out Kamara and Fortuni, but after the image of the first half, he passed them in the match in 46 ‘. Immediately, the two of them significantly improved the image of Olympiakos midfield. The lineup of the red and whites looked more like 4-4-2 (with Kamaras close to Arabi) and not like 4-2-3-1 as the game started. After the opportunity was lost in the 52nd minute with Arabi (he started with great energy and Fortounis’ 40m diagonal ball) in the 55th minute the goal came.

Assist Bouchalakis and excellent play by Brousai. The “red and whites” winger may have been blamed offside at first and was disappointed, but after the control of the phase by the VAR, 0-1 was a fact, since Lopez covered him. First goal in his first final in the league.

AEK increased its performance and after the goal managed to threaten in the 69th minute with the shot of Mandalos that Sa drove into a corner. Olympiakos found spaces and could make it 0-2 with both Arabi in 67 ‘and 68’ with Fortounis.

Carrera made a triple change in the 70 ‘, but changes of persons not order (Sakhof instead of Kristicic, Tankovic instead of Livagia, Paulinho instead of Bakaki). Martins responded with an internal change, bringing Fortunis on the left (he had a free role when he entered the match) and Brusai on the right.

Cisse, as in the first half, easily made the mistake. In 79 ‘his carelessness did not cost, in the same minute he easily conceded one of several corners, but this proved to be fatal.

The … demon in the corner executions Garcia sent her to the second post in the 80 ‘and Simoes sent her into the net, defeating Embilas in the air. Sa is also responsible for taking a step forward and losing the phase.

In the last ten minutes, both teams lost a great opportunity. In the 90th minute, Tankovic’s place went over the crossbar. It was preceded by an impressive action by Garcia that left Cholebas behind.

And in 90 ‘+ 3’ Tsintotas removed the head of Embila. It was the last chance before the final whistle.

The game ended in a draw (1-1) and probably leaves both teams satisfied as it turned out.

The Expected Goals from Opta show you the overall threat of each team, the goals that it “should” score based on its finals. The larger the circle, the greater the chance. You can choose the way of attack and see separately the finals of each team in the normal flow, from set phases, etc.

In the first half we saw a lot of fouls. One after another. The Latvian Andris Treimanis whistled easily, the markings were strong in the players’ effort to save the zero. Very bad spectacle in an equally bad stadium. The backs did not go up to help the extremes, but the opposite happened. Cisse and Semedo competed to see who would make the most mistakes. Poor controls and miscalculations by the central defenders of the “red and whites”.

We also saw tension. Cholebas with Garcia, Arabi with Nedeltsiarou. Thiago Silva was absent in the 45th minute, very well closed by the players of AEK, while Broussai and Masouras did not threaten at all. The second took over all the static phases and from his own foot came the first important opportunity, when the nailed head of Arabi was driven away by Tsintotas.

DANGER IN THE CORNER GARCIA

Unlike Livagia who did not appear, except for the nice dribbling in Rafinia, Garcia was the best for the Union in the 45th minute. As in Rizoupoli, so in OAKA he went to score a goal with a direct corner kick, but Embila in the 35th minute drove on the line. As very dangerous for the defense of Olympiacos was the execution of a corner in 8 ‘. It was not only that, however, as he was the one who removed the danger from the corner kicks of the guests.

Beyond that, too many mistakes on both sides, inability to move the ball, crowds in the midfield. The occupation was in favor of Olympiacos, but so far. Balanced 45 minutes.

Click on “Actual formation” to see where each player’s main action area was.

THE STATISTICS OF THE MATCH