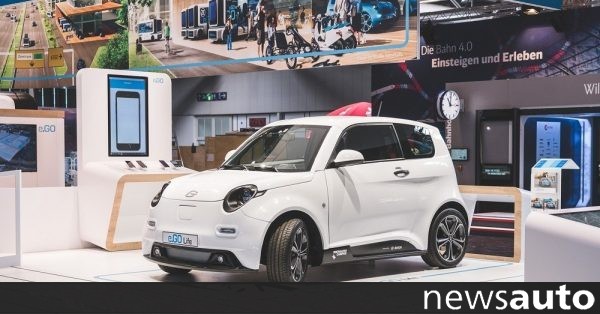 Confirmation of Newsauto.gr for an investment of 100 million euros, 1,000 jobs and the establishment of a Technology and Innovation Campus.

Over EUR 100 million, 1,000 direct jobs and 5,500 indirect and production capacity up to 30,000 electric cars per year will bring in Hellas the investment of German Next e.GO according to what they announced government officials.

THE Prime Minister of Greece Kyriakos Mitsotakis initially thanked its executives German car industry for their intention to invest in our country. Then Mr. Mitsotakis He pointed out that: “The electric car assembly plant will be an important opportunity for Greece to rise further on the world business map while also being a shining example that is able to attract other investments from the automotive and technology sectors. . THE Hellas has outstanding scientists and specially trained staff who can support the investment it will create 1,000 direct jobs and about 5,500 indirect. »

The Deputy Minister for Economic Diplomacy and Extroversion, Ministry of Foreign Affairs, Mr. Costas Frangogiannis He pointed out, among other things, that: “The two parties have agreed and according to estimates within the following Construction will start in 3 to 6 months of the factory aiming at next 24 months to have started operating. The production will be environmentally friendly and the strict German standards applied at the production plant in Germany. The factory will be operated with domestic manpower and the executives will be trained in the production plant in Germany.”

THE CEO of Next.e.GO Mobile SE Mr. Ulrich Hermann pointed out that: “The company’s products Next.e.GO Mobile are distinguished for their technological innovations but also for the high technology they have, such as 5G connection, giving them a significant advantage over other competing models. Our models are aimed at all consumers as they will be affordable to acquire. We are also very happy that we chose Greece for our investment. “

THE Minister of Development Mr. Adonis Georgiadis He pointed out, among other things: “I have personally chosen electric car and assembly plant in Hellas will give the opportunity to Greek consumers to obtain one electric car at a very affordable price. When you start production, know that you will have a friendly government by your side. “

In particular, its main points investment plan include in installation of electric car manufacturing industry with productive capacity up to 30,000 electric cars per year while the amount of investment is estimated to exceed EUR 100 million.

The investment from the German company is expected to create 1,000 direct jobs at the factory and around 5,500 indirect positions in the wider support system that will supply the factory.

In fact the staff to be recruited will be drawn up frequently on central facilities of the company at Aachen, Germany.

The investment plan also includes production of metal parts, the external thermoforming, the final fitting of vehicles and the quality control.

In addition to the above, the investment plan also provides for the establishment of one Technology Campus and Innovation that will connect the scientific and technological research with the production.

Benefits for the Greek economy

THE investment of German electric car manufacturer will bring significant benefits to greek economy as the project will highlight the Hellas in international market as one of the leading European countries in electromobility through creation domestic production capacity.

Also the factory will cause an extra extremely positive economic impact, as it is expected to offer dynamically in increase employment at the same time utilization of specialized, high skills human resource’s, the promotion innovative technology in vehicle construction and its magnification ecosystem support companies (clustering effect).

The development of a strong local network of suppliers for productive needs of factory unit. Specifically in their fields metal parts, του aluminum, of of fabrics and his interior of vehicles, των crystals, etc.

The implementation of the project is expected to attract the investment interest and others internationally renowned electric vehicle industries, gradually transforming it Hellas in a reference country in electromobility and to international brand name. It comes as a follow-up to the recent German entry announcement Volkswagen in GREECE (Astypalea) in its field electric drive and her autonomous driving.

Finally the transfer of know-how from the Germany in Hellas to an unprecedented for greek sector data, which fully complies with government policy to turn to green growth and especially in electromobility.

However, the construction site of the factory has not been selected yet and according to information of Newsauto.gr many Municipalities have already started writing their own tempting suggestions to attract this investment.

Investment with an innovative character

Production is based on use extremely durable materials, environmentally friendly. The aluminum is the main material in construction, which could lead to strategic partnerships with the dynamic domestic aluminum industry.

At the same time it will be implemented reduced planning time, copying proven procedures and equipment solutions in collaboration with e.GO network and reliable people will participate in the project materials suppliers, machinery and equipment with international experience project.

The application of will also be used e.GO computer systems, factory technology Industry 4.0 and digital integration in e.GO production network.

The company utilizes the unique network of research facilities and more than 400 companies technology located in RWTH Aachen Campus of the homonymous University in Germany.

From 2018, the Next.e.GO Mobile SE develops and produces the electric car e.GO Life in the industrial area Aachen Rothe Erde.

The company is the only one independent producer of authentic German equipment (Original Equipment Manufacturer) four-wheel drive electric vehicles.

The basic model e.GO Life constitutes a two-door four-seater model with battery 21.5 KW, electric motor 57 kW (77 hp) from Bosch and a total weight of 1.2 tons. Its autonomy in the city amounts to 203 kilometers, while in the national road network its autonomy is reduced to 139 kilometers.

The construction of the model is done on an aluminum frame, while its body is made of special plastic-polymer material. THE e.Go emphasizes that many of its parts can be recycled at the end of the “life” of the car.

When do the KTEOs reopen – The deadlines for control

SOS! Old and polluting cars are blown away